Wookieepedia
Register
Don't have an account?
Sign In
Advertisement
in: Real-world articles, Articles with an excess of redlinks, 1996 releases, Legends novels

This article is about the book. You may be looking for the Almanian Uprising.

Ambush at Corellia
The New Rebellion is a Star Wars Legends novel by Kristine Kathryn Rusch and was published in 1996 by Bantam Spectra. The novel takes place in 17 ABY, shortly after the Black Fleet Crisis.

Somewhere in the galaxy, millions suddenly perish—a disruption of the Force so shocking it is felt by Luke at his Jedi academy and by Leia on Coruscant. While Leia must deal with an assassination attempt, a rumored plot against the New Republic, and allegations that Han Solo is involved, Luke seeks out a former Jedi student who may hold the key to the mass destruction. But Brakiss is only the bait in a deadly trap set by a master of the dark side who is determined to rule as emperor. He's targeted Luke, Leia, and Leia's Jedi children to die. Then billions will follow, in a holocaust unequaled in galactic history.

The Dark Jedi Kueller sets in motion a plan to bring down the New Republic and the new generation of Jedi. First, he kills over a million innocent natives of the planet Pydyr and then sets off a bomb in the New Republic Senate Hall.

As Jedi Master Luke Skywalker searches for the one behind all of this, Leia Organa Solo has her own problems arising from conflicts with newly elected former Imperials in the senate, and the framing of her husband Han Solo by the smuggler Jarril, who is suspected to be responsible for the senate bombing.

As Han Solo travels with Chewbacca to the Smuggler's Run to investigate the actions of Jarril in hopes of getting to the bottom of the Senate bombing, Luke Skywalker visits Brakiss on Telti looking for information, and Lando Calrissian heads to The Run after Han Solo who he fears is in danger.

Meanwhile, Cole Fardreamer, with the aid of R2-D2 and C-3PO, discovers a plot to install all New Republic X-wing's with remote detonators. Leia becomes aware of this and concedes her position as president to Mon Mothma in order to rescue Luke from Kueller who has taken him prisoner on Almania. After Han rescues Lando, rather than Lando rescuing Han, from the clutches of the crime lord Nandreeson, and the two of them aide hundreds of smugglers after an accidental bombing of the Run, Han also heads to Almania to rescue Luke.

Han arrives at Almania in the midst of a vicious battle between New Republic forces led by Wedge Antilles and Kueller's fleet. Han is also met by Talon Karrde and Mara Jade who have brought ysalamiri to assist in the battle against Kueller. After a long grueling battle against Kueller, in which Kueller has gained a tremendous amount of power fueled by Luke's own anger at himself for allowing Kueller to fall to the dark side, Luke is preparing himself for death at Kueller's hands as Han arrives on the scene with the ysalamiri, sapping both Luke and Kueller of their power, and in doing so allows Leia to finish Kueller with two lethal blaster shots.

R2-D2 and C-3PO simultaneously thwart Kueller's plan to detonate millions of droids across the galaxy. This enables Leia to return to Coruscant and regain her post as president from Mon Mothma. 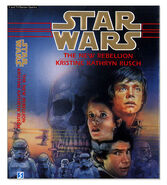