Wookieepedia
Register
Don't have an account?
Sign In
Advertisement
in: Real-world articles, Quotes with obsolete sourcing, Read-Along Storybook and CD

Attack of the Clones Read-Along Storybook and CD

"This is the story of Star Wars: The Phantom Menace. You can read along with me in your book. You'll know it's time to turn the page when your hear this sound.... Let's begin now."
―Michael D. Hanks[src]

The Phantom Menace Read-Along Storybook and CD is a young readers' story from Disney–Lucasfilm Press, released on January 3, 2017, written by Elizabeth Schaefer and illustrated by Brian Rood. It presents an illustrated version of the story of Star Wars: Episode I The Phantom Menace with an accompanying CD with narration of the story and character voices and is narrated by Michael D. Hanks.

Relive all of the excitement of Star Wars: Episode I The Phantom Menace in this illustrated storybook-and-CD set.[1] 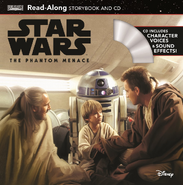 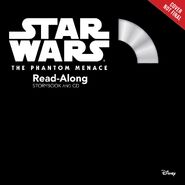