The Rise of Kylo Ren 3

The Rise of Kylo Ren 3

The Rise of Kylo Ren 2

The Rise of Kylo Ren 4

BEN SOLO, KNIGHT OF REN? Soon, BEN SOLO'S path will end in a place of fire and blood, and a shadow will rise to take his place. He is with the KNIGHTS OF REN now, and they will welcome him, if he can pay their price. But before that destiny is fulfilled, a battle must be fought at an ancient JEDI Outpost on the planet ELPHRODA [sic] - between Ben and those who know what he could have been… and fear what he might become. Fear leads to anger. Anger leads to hate. Hate leads to suffering. Everyone here is afraid - Ben Solo most of all!

Finding the Knights of Ren[]

On the Mid Rim world of Varnak, Vicrul informs the Knights of Ren's leader Ren about the arrival of a disheveled and bruised Ben Solo. Ren remarks that Ben took his time getting here and that he is lucky that he arrived because they are planning to take off soon. When Ren remarks that it looks like Ben has been "chewed and spat out," Ben tries to explain that was not what happened.

Ren reassures Ben that he was just joking before telling Ben to relax. Ren removes his mask and remarks that the mask is "kind of intense." Having communed with Snoke earlier, Ren thinks that Snoke is right that he and Ben will be friends. When Ren asks Ben why he has sought the Knights of Ren, Ben replies that he wants to travel with them in order to learn. He also says that he can be useful and strong.

Ren agrees that Ben could be strong in the "Shadow". He says that Snoke told him that Ben could be special. Ren adds that the price of joining the Knights of Ren is a "good death." Trying to impress Ren, Ben tells him that he killed a Jedi. Ren shares Snoke's doubts that Ben killed Luke Skywalker, describing the Jedi Master as "tough as they come." Ben clarifies that he did not kill Skywalker but someone else. As the Knights of Ren gather around Ben, Ren asks Ben to tell him whom he killed.

Ben begins to recount his duel with the three Jedi pupils on the Outer Rim world of Elphrona. One of the Knights recognizes Ben as a pupil of Master Skywalker but Ben replies that he is no longer a Jedi, claiming that he destroyed Luke's Jedi Temple and that the three Jedi are pursuing him because of that.

Seeking to verify that Ben scored a "good death", he asks Ben to tell him what the three Jedi meant to him. Ben explains that the trio were fellow pupils of Skywalker that he had known since childhood. In a flashback scene, Master Skywalker supervises a levitation lesson that involves getting the Jedi pupils to lift rocks. As R2-D2 watches, Skywalker tells them that the Force flows through them and shows them the truth. Skywalker claims that there is no difference between them.

Ben explains that he was Skywalker's first Jedi pupil and that Voe, Hennix, and Tai came not long after. When Ren asks about the trio, Ben recalls that Voe had a hard time accepting her place in the "way of things." Voe was jealous of Ben's Force powers. Luke had tried to reassure her that different people perceived the Force differently, reasoning that some people had a "wider door" to the Force. He explains that Ben is not stronger but just has a better connection with the Force.

As the years passed, Ben explains that Voe tried to best him in various Jedi arts including lightsabers and meditation but was unable to beat him. Ben reasons that Voe was unable to accpet herself but was obsessed with besting him. He recalls that Voe got angry and ashamed, things that Jedi are not meant to get angry about.

Ben recalls that the Quarren Hennix was different describing him as smart and funny. While Voe thought that the Force was a contest she could win, Hennix thought that the Force was a puzzle that took an interest in holocrons. In a flashback, Hennix communes with a holocron in Huttese but does not understand the language. While Voe knew that he could not solve the Force, Ben reasons that he would have been happy to have spent his lifetime trying to do so.

Ren observes that Voe had "brawn" and that Hennix had "brains" before asking about the third Jedi. Ben recalls that Tai, who was a telepath, was curious about why Ben hid so much about himself, reasoning that the Force could help him to sense things. Tai is curious why Ben has locked his mind tightly. Ben had confided that he struggled with the fame associated with his name. Tai had counseled Ben to be who he is and not to be afraid of his identity. He reassured Ben that people would accept him for who he was and that he is not as bad as he thinks. Tai tells Ben not to be afraid of what others think. 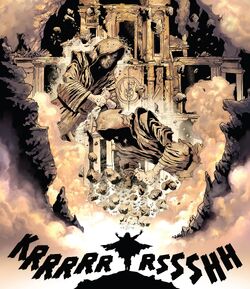 Back in the present, Ren is unable to describe Tai's power but thinks he has a good picture of the person. He tells Ben to get back to the story of the fight and "death." During the duel, Tai tried to penetrate Ben's mind, but Ben hurled him to the ground. Ben is furious that the other Jedi followed him and tells them to leave him alone. Ben leaps on top of a high rock. Believing Ben to be lost, Voe Force jumps after him. Hennix tries to tell her not to go too far because he can't catch up with her.

Voe leaps after Ben in mid-air, accusing him of betraying the Jedi and Master Skywalker. Hennix thinks that Voe is being foolish and tells her that they need to stop and think. Voe and Hennix corner Ben at the top of the rock. Voe denounces Ben as a murderer. Believing that Voe is trying to provoke him into killing, he Force pushes her, but is soon overcome by guilt and regret.

Ben tries to pull her to safety, but loses his grip. Believing that Ben has sent Voe to her death, Hennix attacks Ben from behind with his lightsaber. While Hennix confronts Ben, Tai uses the Force to slow down her fall, catching her. Shortly later, they hear Hennix screaming in pain. Tai helps Voe to her feet. Before they can help Hennix, Ben catches up with them and hurls them into the Elphrona Outpost with the Force. Ben then uses his Force powers to collapse two statues on top of Voe and Tai, burying them under rocks and debris.

Returning to the present, Ren asks his fellow Knights what they think. While accepting that Ben killed Hennix, he still thinks that it was not a good death. Ben protests that he killed the Jedi Hennix but Ren counters that Ben did not intend to kill the Jedi.

After donning his helmet, Ren says that Snoke vouched for Ben and says that he is strong in the "shadow." Ren invites Ben to spend some time with his Knights and says that it might be a good opportunity for Ben to find a "good death" in order to prove his worth. Ren tells one of the Knights to outfit Ben with new dark clothes, dismissing his Jedi garments as trash. Ren then brings Ben along to find "something to burn."

Back on Elphrona, Voe and Tai used the Force to flee themselves from the rubble. Tai recalls that while trying to calm Ben's mind, he saw that Ben was seeking a group called the Knights of Ren. Ben believes that the Knights can help him find his true path. Voe replies that she doesn't care where Ben's path will take him but is only interested in where it ends. Tai agrees and draws his lightsaber, saying that he thinks that Ben is lost. The two gaze down at their fallen Jedi comrade Hennix.

Cover B (not final)