Wookieepedia
Register
Don't have an account?
Sign In
Advertisement
in: Real-world articles, Articles in need of updating, Articles that need plot summary,
and 4 more

Lesser Evil redirects here. You may be looking for the 1996 short story "The Lesser Evil".

"My job is to protect the Ascendancy and the Chiss people…
Whatever it costs to achieve that goal, I will pay it."
―Senior Captain Thrawn, and the back cover blurb[5]

Thrawn Ascendancy: Lesser Evil is a canon novel written by Timothy Zahn as the sequel to Thrawn Ascendancy: Greater Good, and the final volume of Star Wars: The Ascendancy Trilogy. It was published by Del Rey on November 16, 2021 along with its audiobook adaptation.

The fate of the Chiss Ascendancy hangs in the balance in the epic finale of the Star Wars: Thrawn Ascendancy trilogy from bestselling author Timothy Zahn.

For thousands of years The Chiss Ascendancy has been an island of calm, a center of power, and a beacon of integrity. Led by the Nine Ruling Families, their leadership stands as a bulwark of stability against the Chaos of the Unknown Regions.

But that stability has been eroded by a cunning foe that winnows away trust and loyalty in equal measure. Bonds of fidelity have given way to lines of division among the families. Despite the efforts of the Expansionary Defense Fleet, the Ascendancy slips closer and closer toward civil war.

The Chiss are no strangers to war. Their mythic status in the Chaos was earned through conflict and terrible deeds, some long buried. Until now. To ensure the Ascendancy's future, Thrawn will delve deep into its past, uncovering the dark secrets surrounding the ascension of the First Ruling Family. But the truth of a family's legacy is only as strong as the legend that supports it. Even if that legend turns out to be a lie.

To secure the salvation of the Ascendancy, is Thrawn willing to sacrifice everything? Including the only home he has ever known?[6]

Around 18 BBY,[2] Senior captain Thrawn meets Generalirius Nakirre, ruler of the Kilji Illumine, both engage in a confrontation at the Zyzek system, orbiting the planet Zyzek. Nakirre is mocked by Thrawn, who tells the Kilji that the Kilji way of order and enlightenment will not change the Chiss ancient paths.

Nakirre and the Grysk Jixtus, who accompanies him in his travels, leave, and attempt to meet Clarr Patriarch Clarr'ivl'exow at Rhigar. However, they instead meet Captain Clarr'os'culry, who is offered warships of the Illumine by Nakirre, and a recording of the Hoxim incident by Jixtus. Roscu leaves with the recording, whcih she shares with her Patriarch, who unbeknownst to her, has made a deal with Jixtus to buy several Grysk ships.

Roscu leaves to Ornfra, where she is confronted by Senior Captain Irizi'in'daro and the Chiss heavy cruiser Grayshrike. She is informed by Ziinda that there is a Grysk missile platform hidden as a Mitth spy platform next to her. Roscu flees the Grysk attack and a freighter controlling the platform blows up.

As tensions rise in the Ascendancy, Thrawn captures the Kilji picket cruiser Hammer with the Paccosh Uingali foar Marocsaa. Gaining data on the Illumine Kilhorde—the battle fleet of the Kiljis—Thrawn makes an alliance with the Paataatus to destroy the Kiljis. In the meantime, Nakirre and Jixtus mock and confront each other several times, which makes the generalirius alert that he is but a tool of the Grysks. The Kilhorde is destroyed at some point, and Nakirre and Jixtus travel to Sunrise, where they encounter Thrawn's fleet.

Nakirre is informed of the Kilhorde's destruction, and he insults Jixtus, who in turn, kills the Kilji. A battle erupts between the incoming Grysk fleet and Thrawn's forces, however Thrawn is victorious on he military side. In the political side, however, he is exiled by the Defense Hierarchy Council.

In chapter 26 the Springhaw's helm officer, Tumaz'mor'diamir, is twice called Evroes'ky'mormi, who is the Vigilant's weapons officer.

In chapter 28 Thrawn is noted as a merit adoptive. However, in Memories 13 of Chaos Rising he was made a trial born,[9] and the dramatis personae of Greater Good and Lesser Evil lists him as a trial born. 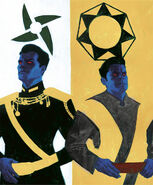 Out of Print edition

Out of Print cover art

Out of Print edition slipcase