Wookieepedia
Register
Don't have an account?
Sign In
Advertisement
in: Legends articles, Articles to be expanded, Deep Core star systems,
and 3 more

"From Tython, the children of the Je'daii spread out across the Tython system. Traveling toward toward the sun, they settled on Sunspot and Malterra, Nox, and arid Krev Coueur. Beyond Tython, they settled first on Kalimahr, jewel of the Tython system, then Shikaakwa, the outlaw world, then on forest planet Ska Gora, and on the moons of the giants—Obri and Mawr—and even the outermost planet, cold Furies Gate."
―Ketu[6]

The Tython system, also known as the Tythan system, was a star system located within the Deep Core. Centered around the star Tythos, the system contained eleven planets, including the planet Tython, which was the homeworld of the Je'daii Order thousands of years before the founding of the Galactic Republic. The system was settled for a time by the Kwa in the millennia before the Tho Yor Arrival in 36,453 BBY, when the eight great pyramid ships known as the Tho Yor brought Force-sensitive pilgrims of many different species to Tython to study the Force. Over a thousand years later, the non-Force-sensitive Tythans spread out over the Settled Worlds, as the system's planets became known.

The Tython system,[2] also known as the Tythan system,[7] was located within the galaxy's Deep Core region.[1] The Settled Worlds were spread over sixteen billion kilometers.[7]

Around 29,000 BBY, the Tythans conducted a series of exploratory missions to Sunspot, hoping to discover signs of habitation that would prove that the planet did not originate in the Tython system but was in fact a rogue planet caught in Tythos's gravity. However, the missions were ultimately unsuccessful.[7]

During the Clone Wars, the sectors of the Galactic Republic were assigned one of twenty oversectors, and were the operating theaters of the troops fighting the Confederacy of Independent Systems, with the Tython system being assigned to Sector 5, which was defended by the Republic Military's Fifth Deep Core Army.[8] In the year following 19 BBY,[9] which saw the deaths of the vast majority of the Jedi and the rise of the Empire,[10] Emperor Palpatine implemented the Tarkin Doctrine, reorganizing the oversectors into political as well as military entities, giving each Imperial Grand Moff command over an oversector each.[11] Grand Moff Cinzero Gann was given command of Sector 5.[8]

Sunspot was a small planet that was the closest to Tythos in the system,[2] though it moved along its orbit in a direction opposite that of the other planets in the system,[7] and it was believed by Tythan scientists that Sunspot was actually a "rogue" planetoid that had been caught in Tythos's gravitational pull. Sunspot's orbit took it as close as forty-eight million kilometers from Tythos at times, and much of the planet's surface was in constant turmoil as it was racked by gravitational forces that caused violent seismic and volcanic activity. Petonium and marionium, elements that were used to power ships' drives, were among the elements found on Sunspot. Most of the planet's settlers lived at the poles in scattered mining communities, and 10% of those who came to Sunspot seeking their fortune died there—most miners only lasted one or two seasons before they left the world. Sunspot's surface was covered by volcano ranges and magma lakes and rivers, and the clouds of noxious gas occasionally led the planet to have a pinkish hue from space.[7] Sunspot and Malterra's orbits caused the planets to pass very close to each other at a certain point, resulting in violent storms on both planets[2] as they passed within half a million kilometers of each other.[7] Sunspot's surface was extremely hot, but the Tythans developed environment suits that allowed them to conduct mining operations on the planet's surface.[2]

Malterra was the second planet closest to Tythos in the system. When the small planet passed Sunspot, the planet closest to Tythos, in its orbit, violent storms were often experienced. While it was known to have an extremely hot climate, many non–Force-sensitive settlers still colonized Malterra, more than thirty-six thousand years before the Battle of Yavin.[2]

Mawr was the tenth planet in the Tython system, a large gas giant with seven moons that was one of the two largest in the system along with Obri. An orb of black and reddish orange gas, Mawr was known as one of "the Giants" along with Obri. Several gas-mining facilities had been established in Mawr's atmosphere by the year 25,793 BBY,[2] and Mawr's moons were colonized by the Tythans during the second migration.[6] 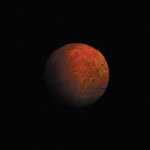 Furies Gate was the outermost planet in the Tython system, and it was a barren world less than a third of the size of Tython that was unsettled apart from Fury Station, a space station in orbit of the planet. Fury Station was a scientific outpost,[2] and also served as a launch point for several of the sleeper ships that the Tythans sent out into the galaxy,[12] which eventually settled Empress Teta, Coruscant, and Corellia.[13] Furies Gate featured a barren red surface and lacked any moons, and its distance from Tythos led it to be a cold world.[2]