Ultimate Star Wars is a canon reference book written by Ryder Windham, Tricia Barr, Adam Bray, and Daniel Wallace, including a foreword by actor Anthony Daniels, who plays C-3PO in various forms of Star Wars media. The book was released by Dorling Kindersley on April 28, 2015, and on September 1, 2015, a special edition with frame images, props, and behind-the-scenes shots of the cast and crew of Star Wars: Episode VII The Force Awakens, as well as two behind-the-scenes prints, was released. The reference book features info on characters, locations, weapons, and vehicles pulled from various corners of Star Wars canon.

Become an expert on the Star Wars galaxy!

Your ultimate guide to the Star Wars™ universe

Open this ultimate visual feast and explore the iconic characters and storylines from the Star Wars galaxy. Beautifully illustrated, Ultimate Star Wars is packed with information about every single character from Mace Windu to Darth Maul through detailed analyses of their stories throughout the saga. 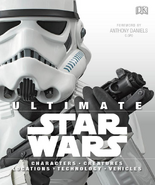 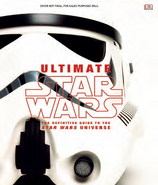 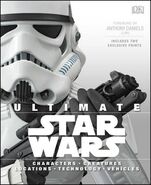 Special edition cover
Add a photo to this gallery

In other languages
Retrieved from "https://starwars.fandom.com/wiki/Ultimate_Star_Wars?oldid=9903584"
Community content is available under CC-BY-SA unless otherwise noted.