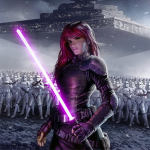 Han Solo: "Watch your mouth, kid, or you're going to find yourself floating home!"
French dubbing: "Don't get excited, kid. Take your shovel and your bucket, and go play!"
―Han Solo, to Luke Skywalker[src]

Hello there, <insert name here>, and welcome to my page! I'm DKS MaXoO, and I've been an active contributor on Wookieepedia since 2013. I'm exclusively interested in Legends material.

I discovered Star Wars back in 1999 with the release of The Phantom Menace. I grew up with Star Wars video games such as the Rogue Squadron series, The Clone Wars, Jedi Outcast and Jedi Academy.

My interest in the Expanded Universe really took off with the release of Empire at War and Forces of Corruption. In 2007, I joined the modding team responsible for the development of Strategic Improvement. This French mod for Forces of Corruption covers the period between 19 BBY and 29 ABY, and is meant to be extremely faithful to the Expanded Universe.

As a contributor for this mod, I spent a lot of time reading articles on Wookieepedia. As a result, I also became an active contributor on Wookieepedia in 2013. Ever since then, I work on articles that can help me enhance the Strategic Improvement mod. My knowledge of the Expanded Universe mainly covers the period between 22 BBY and 19 ABY, which includes the Clone Wars and the Galactic Civil War.

My first project on Wookieepedia was the inclusion of battles in sector infoboxes. My second main work on this wiki was the categorization of starships by type and by affiliation, and the categorization of battles by conflict and by region or sector. My third main project on Wookieepedia was creating articles related to Star Wars Comic UK publications, an exhausting work that took me nearly a year to complete. Consequently, I became Wookieepedian of the Month for February 2018. I'm still quite proud of this long-awaited award.

My favorite sources for contributing to this wiki are comics and reference books such as The Complete Star Wars Encyclopedia, The Essential Atlas and The Essential Guide to Warfare.

My contributions are usually centered around battles, planets and sectors. When I create a new article, I always try to add an image, a quote, a reference list, and a category. I also like to fill in the infoboxes as precisely as possible. I usually don't expand these articles beyond that, preferring to leave the main bodies of these articles to be written by other contributors.

Retrieved from "https://starwars.fandom.com/wiki/User:DKS_MaXoO?oldid=8657583"
Community content is available under CC-BY-SA unless otherwise noted.