"I'll ask you to send me your teeth ground in impotent rage."
―Dmitry Rogozin, my brother in spirit[src]

"Whether you like it or not, history is on our side. We will bury you."
―Nikita Khrushchev, inadvertently predicting Wookieepedia, and more specifically me[src]

Proudly misusing "hyperinclusionist fanwankery" as a battle cry since November 2006!

This is Darth Culator's user page.

Song of the day

With profuse apologies to Sting

Some more thoughts on image quality

The following tools are essential:

These pages probably violate some rule or other, but they're too awesome to delete

Boy, there are a lot of these now. This should be a pretty complete list.

Someone remind me why anyone considers Wikipedia remotely reliable.

I now have a working bot.

It will mostly be used to replace obsolete images and other chores related to deleting stuff, since that's my favorite thing to do. I may occasionally do stuff on Wookieepedia:Bot requests, but don't count on it.

Fanfic idea of the day

"In 16GR a clone commando unit was sent to prison by a military court for a crime they didn't commit. These men promptly escaped from a maximum security skyhook to the Coruscant underground. Today, still wanted by the Empire, they survive as soldiers of fortune. If you have a problem, if no one else can help, and if you can find them, maybe you can hire the Aurek-Team."

This is a canonical woolamander.

This is a Star Wars Galaxies woolamander:

Now, this is a canonical Selonian:

And THIS is a Galaxies Selonian:

In a perfect world

In a perfect world, George Lucas would release the following press release:

Quote of the random time period

"People assume that time is a strict progression of cause to effect, but actually, from a non-linear, non-subjective viewpoint, it's more like a big ball of wibbly-wobbly, timey-wimey... stuff."
―The Doctor[src]

With apologies to Monty Python.

She was not in the least bit scared to be mashed into a pulp.
Or to have her eyes gouged out and her elbows broken.
To have her kneecaps split and her body burned away
And her limbs all hacked and mangled, Adm'ral Daala.

Her love vaporized
And her hideout found
And her minions kidnapped
And her Suncrusher stole
And her ships destr- ("That's--that's enough music for now, lads!")

So Daala ran away. ("No!")
Bravely ran away, away. ("I didn't!")
When Rebels reared their ugly heads,
She bravely turned her tail and fled. ("No!")
Yes, Adm'ral Daala turned about ("I didn't!")
And gallantly she chickened out. ("I never did!")
Bravely making hyperspace
She fled the scene at rapid pace, ("All lies!")
Bravest of the brave, Adm'ral Daala! ("I never!")

She is packing it in,
And packing it up,
And sneaking away,
And buggering off,
And chickening out,
And pissing off home,
Yes, bravely she is throwing in the sponge.

The real Darth Culator is a 33 year old guy with a great job, a car that terrifies the masses, a slightly irritating but still irreplaceable family, some fairly crazy friends, and a hobby that consumes an unhealthy amount of his free time. He's slightly eccentric and likes to use the third person a lot. He doesn't wish to offend the mighty one or his Bryar pistol, but presumes to claim he has a Katarn-like beard.

The admins on this wiki tend to get impersonated a lot by people who have no lives. So just for reference, here's where you'll see a Darth Culator that's actually the real one. I am, as far as I know, the first person to come up with the name Darth Culator, so check with me if you see one anywhere other than someplace on this list.

Wikis I'm on (as Darth Culator):

Forums I'm on (as Darth Culator):

Chats I'm on (as Darth Culator):

Wikis I'm not on (as Darth Culator):

Forums I'm not on (as Darth Culator):

Chats I'm not on (as Darth Culator):

Games I'm not on (as Darth Culator):

If you see a wild Culator anywhere else, there's a very good chance it's an impersonator. We have very dedicated and experienced trolls. I will not be held responsible if you are fooled by them.

Miscellaneous stuff which is hopefully allowed

On life in general

Because people cared enough to give me these, it's only polite to flaunt them.

For your efforts at turning a stub of a fat man into an article that is practically Featured material, I present you with this wookification award. The Force is strong with you. -- SFH 21:36, 5 February 2006 (UTC)

The Wookiee Leader Award
The Pit Droid Award of Diligence 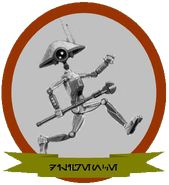 The Pit Droid Award of Diligence is presented to Darth Culator for deleting large amounts of unused images and fair-use violations galleries.
Add a photo to this gallery

I, TK-999, in possession of a sound mind and soul, hereby award you, Darth Culator, the Pit Droid Award of Diligence for your gruesome efforts to rid the wiki of old versions of images. Since the work you do is large enough to clog the deletion log with "Deleted old revisionYY/MM/DD!File:xxx.jpg", your monotonous edits truly make you legible for this award.—TK-999 20px(Rise of the Empire) 19:36, May 19, 2011 (UTC)

Revenge of the insane theories

Many of the inconsistencies in galactic history can be explained away by powerful but long-deceased superbeings. The Architects. The Celestials. The stuff of myths and legends.

I say those legends involved a lot more fur and trees and dancing than anyone thought.

Because the Great Ancient Race of legend was actually the Ewoks.

Think about it for a minute. Think about all the "magic" that happens on Endor. All a bunch of quantum smoke and nanotechnology mirrors.

The Endor Holocaust was averted by the automatic self-activation of the Shiny Happy Deflector Shield. It was part of the Super-Special Welcome-Strangers Planetary Defense Grid, which once defended the Space-Battles-Are-Megatons-Of-Fun Shipyards.

The Ewoks were masters of space and time. Beings with powers beyond imagining. Until they met an equally powerful race that was mean and nasty and hated dancing and trees. Perhaps the Killiks. Perhaps the Rakata. We may never know.

But a brutal war wiped out both the Mean Nasty Enemy and most of the Ewoks, and the last remaining members of the Ewok Empire retreated to Endor, where they eventually forgot their legacy of expansion and abandoned their technological ways.

Remnants of the Golden Age of Ewoks and the Big Not-Fun War that ended it are everywhere. The Maw. The Utegetu Nebula. The Kathol sector. A great big mess left by the teddybears of doom and their foes.

Tits McGee could refer to:

This is a disambiguation page—a navigational aid which lists other pages that might otherwise share the same title. If an article link referred you here, you might want to go back and fix it to point directly to the intended page.