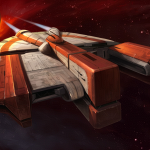 Greetings everybody! I am Darth Ravigious. As you can probably garner, I am a huge Star Wars fan. For about seven or eight years I have been coming onto this fantastic website, but, while I've always made some edits and corrections here and there, I finally decided to join Wookieepedia in September of 2014 due to the impending release of new Star Wars material. I was originally bothered by Disney's cleaning of house in regard to the old EU, but now I am a sympathizer. The Old Canon was amazing, but the new stuff is shaping up to be nearly as good, and true to all the old stuff. This being a new era of Star Wars, I have decided to help expand this website as much as I can to reflect all of this new information. I thought all my edits would get deleted, so apparently I'm doing something right (though, of course, we all make mistakes). Anyway, I have read countless of Star Wars books, and listened to even more on audio. Mark Thompson is the man!

I first got interested in the EU after renting the "Force Unleashed" Wii version at a Blockbuster (yeah guys, remember when that was a thing?) and absolutely loved it. I then began delving deep into the expanded universe after that. It was also around that time when the Clone Wars aired (late 2008), and I absolutely loved it. While I stopped watching the show by High School, I eventually binged it on Netflix two falls ago. My favorite videogame, besides Mass Effect 2, is Star Wars: Knights of the Old Republic. I actually bought it by accident, sort of. I went to Best Buy to pick up a copy of Battlefront 2, which, in 2009, was about four years old. Yet somehow they were all out. The attendant then reccommended that I get "The Best of PC" Collection. I played KOTOR for hours and hours. I've only beaten the second one twice, but have started it more times than I could ever care to count. The reason I could never finish it is most likely due to conflicting mods, but it is most recently attributed to a Steam glitch.

I go to college in Virginia and am double majoring in political science and theatre with an acting concentration. I also am required to minor in leadership studies because of the program I am in, which offers me a scholarship. Anyway, I actually quite enjoy editing this site. It is a lot of fun to expand it, so other fans may come and learn about this great universe.

Retrieved from "https://starwars.fandom.com/wiki/User:Darth_Ravigious?oldid=6161925"
Community content is available under CC-BY-SA unless otherwise noted.