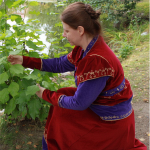 Hello there, every Wookieepedian who visits my page!

I'm Dionne Jinn, a dedicated Wookieepedia user and an administrator in Jedipedia, Wookiee's Finnish equivalent. I've been Wookieepedian since June, 2007, but my activity level has been fluctuating quite a lot. My early time in the Wook was mostly spend in translating articles into Finnish for Jedipedia's benefit and adding interwiki links between the two. I also have an annoying habit of asking questions all around the place, most of the time without getting an answer...

I read a lot and write some, just for my own fun and that of my friends. I also enjoy good role playing games, particularly WotC's Saga Edition, but there are good story lines in older WEG materials, too. I'm a big fan of Timothy Zahn's Star Wars novels, especially Outbound Flight and Choices of One, and I absolutely adore Zahn's way of portraying Mitth'raw'nuruodo. I'm overall obsessed with all things Chiss! (As if that wasn't obvious from my user image...)

I've written three featured articles to Wookieepedia. Well, actually I wasn't around when the first one finally passed into FA status, because I lost access to Internet for over a month during the final stages of the FAN process—something I'll never forgive myself. Currently I'm working on one previous nomination I gave up earlier because of some real-life issues. I've also got an offshoot of my pet project up to Good article status. Another good article made it to the status.

I have done 3,235 edits in Wookieepedia.

Retrieved from "https://starwars.fandom.com/wiki/User:Dionne_Jinn?oldid=8650349"
Community content is available under CC-BY-SA unless otherwise noted.