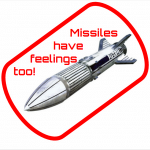 "Missiles have feelings, too!"
―My new favorite thing to say[src]

Hello, fellow Star Wars fan. My name is Geek'ari, Lord of Geeks, and this is my userpage.

My first real Star Wars book I read was The Phantom Menace, by Terry Brooks, in which I was introduced to my first fact of the Expanded universe: Darth Bane's existence.

The first non-novelization I read was The Wrath of Darth Maul, followed by Heir to the Empire by Timothy Zahn, and the rest of The Thrawn Trilogy. Since that day, I have read dozens of Star Wars books, both Legends and Canon.

After years of reading this site and imagining being a user here, I joined Wookieepedia on February 19, 2016.

Everyone has his or her own opinion about the de-canonization of the EU, which I like to call "The New Dawn Schism" (a name with a double meaning). Here're my thoughts:

I originally thought that just the post-RotJ EU and the in-between-the-episodes-EU was being thrown out. Then, I found out that Pablo Hidalgo had said that Sith don't use synthetic lightsaber crystals. This kinda stunned me.

I was on-board with the Snoke=Darth Plagueis theory, as long as Snoke turned out to be a muun. When he didn't, I immediately dismissed the theory. But then I came to realize that the Legends muun-status of Plagueis has no bearing on the Canon. I was distressed about this, believing that the EU was about to be killed before my eyes.

Then I had a change of heart. I realized that even if the pre-TPM EU is not canon, it's still there. This revelation came to me while I was on my way to see TFA for the second time. I realized that Snoke being Plagueis is a better story than "Snoke is a random new darksider arbitrarily made-up so that there can be a villain"

This new opinion opened the doors not only to a better Canon; it paved the way for me to re-visit reading post-RotJ and in-between-episode Legends, which I had dismissed as unimportant. Now that they were in a category with the awesome pre-TPM stuff, I was ready to read them.

My opinion of Star Wars: The Clone WarsEdit

There are contradictions between TCW and the affiliated novels and comics, and the previous Legends timeline. There just are; it's un-avoidable.

Because of the contradictions in stories of the Clone Wars Era, in my mind, I have divided the Star Wars galaxy's Clone Wars stories into three continuities: Canon, Legends as it was before TCW (I call it True Legends), and Legends as it is now (I call it NuLegends, in salute to Cade Calrayn's NuCanon).

Why throw out half of the awesome stories of the Clone Wars era when you can just split it into two realities?

My opinion of the Special EditionsEdit

Well, basically I just have to wonder if someone said this:

"Y'know what would make the Original Trilogy, like, a hundred times better? If we replaced that wolf guy with a legless elephant! Yeah, that'd definitely be cooler."
―Someone, maybe?

"Y'know what this trilogy is missing? A song and dance number performed by a long-snouted frog woman a few centimeters from the camera!"
―Someone, maybe?

The dewbacks were cool, though...

So anyway, I mainly focus on making articles out of redlinks, see User:Geek'ari/What I've Read to see what books I own that I can make major contributions from. All other books are usually able to be borrowed in about two months, so if any book in the list has redlinks or articles needing attention or updates, tell me via my talk page.

Retrieved from "https://starwars.fandom.com/wiki/User:Geek%27ari?oldid=9152073"
Community content is available under CC-BY-SA unless otherwise noted.