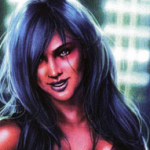 I am Nightlily; a Norwegian woman who works as an archivist in the public sector, and lives somewhere north of the Arctic Circle. I have been contributing to Wookieepedia for many years now. I've written a lot of the material in the Legends version of the torture article (yup, the torture article... which I also created), and I've also written most of the content in list of use of Aurebesh and the Legends versions of the articles on parents and tattoos. And yes, I have a tattoo myself; a beautiful bird on my shoulder.

I created the torture article because torture is a central issue in Star Wars, and because the article can teach us something about our own world. The article shows in a very clear way how gruesome torture is and what it does to people, and in this way encourages the reader to take a clear stand against torture. Although I do have a deep, dark secret: At the time that I created the article, I was going through a very hard time, as I was in chronic physical pain, 24/7. I did not see the connection back then, but oh boy, do I see it now...

In case you wonder: I did not name myself after M'iiyoom Onith, aka Nightlily, from Tales from the Mos Eisley Cantina. I just think it's just a beautiful word. I actually took the name from Night Lilies, a 1998 album by a Scottish singer named Jackie Leven, whom my mother is a fan of.

History as a Star Wars fanEdit

A New Hope and the first prequelsEdit

I was introduced to Star Wars as a child, when I watched A New Hope on television with my family. I forgot most of it later, and I'm not even sure if I watched the whole film. The only moments I remembered, was Darth Vader snapping Captain Antilles' neck, Ponda Baba's arm being cut off (I did not remember the circumstances, or who did it), Luke entering Leia's cell on the Death Star, and a tall, hairy being.

When The Phantom Menace was released in 1999, one day, I was in town, visiting my brother, who was in hospital. While I was there, I wanted to see a movie at the cinema. I'd seen the trailer for "The Phantom Menace", and liked what I saw, and I knew how famous the previous films were. So I watched the film that night, and liked it enough to buy the video as a birthday present for my brother (who also liked it) months later. Back then, I thought most of the story was quite boring (I'm more fond of it today, though), but I liked the beautiful images (like the underwater city Otoh Gunga), and Obi-Wan and Qui-Gon's duel against Darth Maul was fantastic (the music, the lightsabres, the beautiful Theed Generator Complex).

I didn't watch Attack of the Clones at the cinema when it was released in 2002. I had planned to do so, but when most of the reviews turned out to be bad, I changed my mind. Still, I knew what the film was about, and had known since "The Phantom Menace" that Anakin Skywalker would become Darth Vader. I didn't know that Luke was his son, though (I don't know why it never occurred to me that they might be related, since they shared the same last name), until I watched a television program where a person told the viewers that we were going to see when Luke's parents fell in love. Then, the clip of the meadow scene was shown. Later, I read in a magazine that both Luke and Leia were Anakin and Padmé's children, but it did not tell that Luke and Leia were twins. And I still didn't know the circumstances; that Luke didn't know that Vader was his father.

Later, I watched a television program about science fiction movies. A clip of the end of the duel on Bespin, from The Empire Strikes Back was shown. Luke and Vader fighting, Vader cutting off his own son's hand (father of the year...), Luke screaming in pain, Vader revealing his true identity, and Luke's reaction (the clip ended before he let himself fall into the abyss). Sometimes, a dramatic movie scene gives me a kick – hopefully, you know the feeling:-), and this was one of the greatest kicks of my life. I knew I just had to watch that film.

I became a Star Wars fan in 2003 when a friend of mine lent me her Star Wars videos, The Empire Strikes Back and Return of the Jedi (yeah, VHS still existed back then). I watched them and I was hooked. I then bought Attack of the Clones and The Phantom Menace on DVD, and was really... well, pissed off, when I found out that the original trilogy had not been released on DVD (at that time). After watching Attack of the Clones, I bought the original trilogy on VHS, and would finally see A New Hope again, after all these years.

I soon found out there was a whole world of Star Wars Expanded Universe in English out there, and I started collecting in early 2004. The first material I bought was the Shadows of the Empire novel, which I loved. The rest is history. I watched Revenge of the Sith on its premiere day in 2005 (unfortunately, I had to stay away from the midnight premiere – some evil Sith spirit made sure I had an exam the following morning; I'm proud of the fact that I managed to concentrate and focus during the exam while at the same time itching to watch the movie when I was done), and along with "Return of the Jedi", it remains one of the best films I've ever seen.

My interest for Star Wars languished a bit after the Legends label was introduced. The Star Wars that I loved, was one universe – unlike, for example, the Marvel universe, the Star Wars books and movies used to be part of the same world, the same story, the same universe, the same timeline. But when Legends was introduced, we had two universes: Legends and canon. I fully supported Disney's decision to not view the Expanded Universe as canon and make their own version instead (I would have done the same in their shoes), but the new books and comics were not for me. So after collecting Star Wars books for eleven years, I stopped. I was still a Star Wars fan, but in a different way.

However, when The Force Awakens was released, my interest for Star Wars was renewed. I happened to be in London (the greatest city in the world) when the film premiered, and watched the premiere at the BFI IMAX cinema, the largest cinema screen in Britain. Oh boy... It was definitely one of the greatest experiences in my life. The film was just... perfect! It was everything a Star Wars fan could dream of. (George Lucas, I'm looking at you: Selling the Star Wars rights to Disney was the smartest thing you could have done.) As the credits rolled, a man in the audience stood up and shouted "Star Wars is back!". I wholeheartedly agreed with him.

My interest in Star Wars books has since been rekindled. Although I no longer buy every book that is published, I have started reading the new comics and novels (but in digital form – because it saves space), and I've also bought a few reference books – reference books are always fun :-)

The movie also gave me something I've always wanted to watch on the big screen, but never thought I would get to see. It's always annoyed me how the participants in the awesome lightsaber duels in the previous films were always men (The Clone Wars movie does not count – it was animated). The Force Awakens gave me what I've always wanted to see: A live action lightsaber duel between a man and a woman. And that duel in the snow was epic...

Fast forward to two years later. After the release of Rogue One: A Star Wars Story one year earlier (a great movie), The Last Jedi was released in December 2017. Once again, I was in London – and I broke my previous record of the number of times I've watched a movie in cinema (I watched it ten times). Holy sh*t – some of the critics think it's the best Star Wars movie so far, and I agree with them. Sheer perfection :-) The haters don't know what they're talking about – the movie is FANTASTIC!

Two more years passed and I returned to London for The Rise of Skywalker (alright, I confess: I love to travel ;-) ). Once again, I loved what I saw and I ended up watching that film ten times as well; the film is a great ending to the Skywalker saga. And we finally got a kiss between the heroine and the villain, something I had been rooting for since the first film (I have a thing for the bad boys ;-) ).

I've noticed that there are are quite a few names in the Star Wars universe that are similar to the Skywalker name. I've put together a little list, just for fun:

Retrieved from "https://starwars.fandom.com/wiki/User:Nightlily?oldid=9074745"
Community content is available under CC-BY-SA unless otherwise noted.