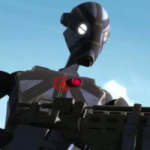 "I don't know everything about Star Wars, but I defiantly know more then I should."
―An accurate description.

Hello! <insert name here> My name is OOM-21 and I'm just your typical Star Wars nerd. Despite having read Wookieepedia articles from the age of seven, I haven't actually started editing on the site until recently. I'm still learning the ropes, but I'm open to learning and ready to help expand the wiki in anyway I can. Although I mostly stick to articles with little to no information on them, since I enjoy writing and am happy to expand an article's information whenever I can get the chance. If you need to talk to me, then please do so on my talk page. Thanks for stopping by!

Some Articles I'm working on: Edit

Warning: The following section is fanon. It is the biography of a user's imaginary persona in the Star Wars universe, and should not be mistaken for canon.
OOM-21, nicknamed "Beaxx", was a BX-series droid commando that acted as a mercenary for hire alongside its counterpart, Eighty-One, during the Clone Wars and the Imperial Era. In its time, the droid pair participated in a number of jobs for assassination, espionage, and a hostage crisis. After loosing its counterpart, OOM-21 was hired to act as military advisor within the Rebel Alliance, causing the Imperial Security Bureau to place a public bounty on the droid.

Attempting to avoid the bounty on its head, OOM-21 fled from the known galaxy, winding up as a combat instructor on the planet Batuu, hired to train members of Black Spire Outpost's local police force. By 34 ABY, the droid was still actively serving the outpost, despite the First Order's occupation of the planet and the subsequent disillusion of the Batuu police.

Retrieved from "https://starwars.fandom.com/wiki/User:OOM-21?oldid=9314111"
Community content is available under CC-BY-SA unless otherwise noted.