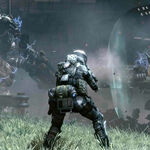 Hello there, Appo's title of clone marshal commander originates from a Star Wars Legends source and has not been confirmed to be his title in Canon as well. The information is present in the Legends version of the article, located at CC-1119. Cheers, 1358 (Talk) 17:24, February 14, 2016 (UTC)

My mistake, I'll discard my edits to the canon page if they have not been changed back yet. Although it is confirmed in legends that he was a marshall commander as other clone commanders in the 501st, including Vill and Bow, reported to Appo during the rise of the empire. I'll have sources listed soon.

Retrieved from "https://starwars.fandom.com/wiki/User_talk:Conmon115?oldid=8528539"
Community content is available under CC-BY-SA unless otherwise noted.