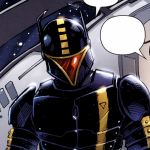 Hey, Jedi-Meister! I noticed that you added Swokes Swokes and Pacithhip to the list of appearances for The Clone Wars: Secret Missions 2: Curse of the Black Hole Pirates. Can you tell me in what capacity those species' appear in the story and in which chapters? I'd like to update their articles to reflect the new appearance, but I don't have a copy of the book. Thanks for any help! ~ SavageBob 06:34, September 9, 2010 (UTC)

Hi Bob. The Pacithhip was just a mentioned pirate, nothing bigger than one or two sentences. The Swokes Swokes was another pirate, called Mokshok. He was an (real good) ambassador of Makem Te, before he was caught by the influence of the black hole during a flight in the Unknown Regions. When Nuru Kungurama and the clones arrived, he was the substitute of Mcgrrrr, the leader of the Black hole Pirates and fled with the help of Nuru through an Kwa-Infinity gate from the force of gravity (coming from the black hole). I don't have the book here right now, so I can't tell you the chapters. If you need them, I can tell them to you till the next days. Master Jedi 18:31, September 9, 2010 (UTC)

Hi Meister. I noticed you have handled nearly every objection to the Drayk (clone trooper) GAN that is currently up. It appears you are taking over the nom, which you should, seeing as you've written most of the article and Talrrivanian seems to have stolen the article from you. If you are taking over the nom, please post that on the nom page just to clear up any confusion, thank you and good luck. :) Kilson(Let's have a chat) 04:14, June 15, 2011 (UTC)

Hey Jedi-Meister, I noticed you recently put a speedy delete template on your Workbench, siting the fact that you don't have time to work on the page. However, just because you don't have time to use it doesn't mean you should delete it. Many Users have blank Workbenches that are not in use when they are not active. In fact, even my Workbench is empty at the moment. Don't have it deleted quite yet, just hang on to it in case you want to use it in the future. Thanks. Kilson(Let's have a chat) 13:51, August 17, 2011 (UTC)

Retrieved from "https://starwars.fandom.com/wiki/User_talk:Jedi-Meister?oldid=8242451"
Community content is available under CC-BY-SA unless otherwise noted.