Ah, do come in <insert name here>, I've been expecting you. 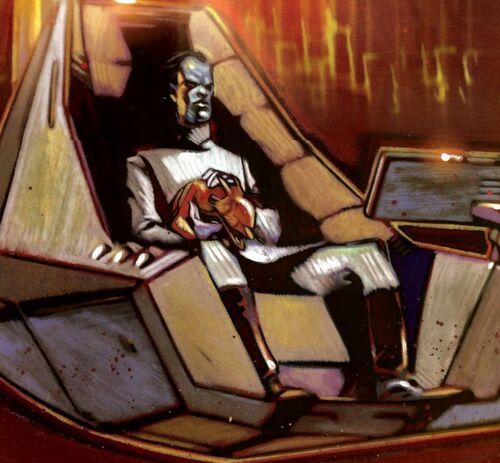 Neither Martio Batch's nor Josef Grunger's hair appear black to me; both appear to be brunet. It seems AdmirableAckbar also does not see the colors the same way you do. jSarek 02:00, 16 May 2008 (UTC)

Hey, just letting you know that you didn't need to create a whole new infobox for a WookieeProject, like you did here ;) I noticed that you copied my code from User:Greyman/Template:WPinfobox. If there's a WookieeProject you're thinking of starting, or adding the infobox too, feel free to use the one I created (Like many other projects have done). There's no need for double templates :) So, feel free to use the template I made if you so chose, and let me know if you don't need the new one anymore and I'll take care of it. Cheers, Greyman@wikia(Talk) 23:43, 31 May 2008 (UTC)

Hey, Thrawn, I saw you add the Project: Ambition template to the Executor article, so I'd thought I'd let you know that I'm currently actively working on bring the Executor to FA status. I'd be glad to help with your project in that regard. :) Toprawa and Ralltiir 22:48, 1 June 2008 (UTC)

Hi. I would like to help on your project. I can contribute with mostly Remnant-related content. Thanks! Car-em Hawhi 21:25, 5 June 2008 (UTC)

Here's the source for the deleted userbox. On the userbox proposal page itself you just need the part within the

It's only safe to say it's legit if you can provide a canonical source to back up that claim. Just because it's on other articles, don't make the potentially dangerous assumption that it's true. It's likely fanon, or conjecture. Hell, it could be true, but until you can provide a source, it is not going in that article. Thefourdotelipsis 11:17, 6 June 2008 (UTC)

Because it was worded like OR, and most of it was OR. If you want to comment on how her name differs from the Chiss norm, and if you want to mention Ar'alani and all that, by all means do so, in a way that is not essay-style OR and does not include fanon names, hypothetical or not. -- AdmirableAckbar (Talk) 15:42, 16 June 2008 (UTC)

Your edit has been mentioned in IRC and it was identified as speculation there by several users and administrators. As for you not being sure under what authority I am operating on I think you are taking your username a little too serious. Now if you will excuse me, I have a date in the Shadowlands of Kashyyyk with a Czerka Employee regarding the hunt of several Tach. MadclawShyriiwook! 06:20, 18 June 2008 (UTC)

Not for the sake of argument but who's not being civil at the moment?

unless there is an "Inuse template" there I can pretty much edit anything I wan't as long as I am following policy.

Well you must be easly insulted then, for the record it was meant as irony, me acting like my username was irony too.

Ok I retort with saying Under what authority do you claim I have no right to edit that specific article?

I haven't voted because it could use some more Revelation info, which I plan on adding soon (hopefully tomorrow). Once that gets in, it should be good. Chack Jadson (Talk) 20:27, 18 June 2008 (UTC)

Hey, Thrawn, I thought I would leave you another friendly heads up after reading this that I am currently writing the Executor article under my own subpage. I've acquired all the sources and the project is already under way. Once again, I'm glad I'll be able to help with your project in this capacity. Thanks. :) Toprawa and Ralltiir 22:22, 18 June 2008 (UTC)

No, it wouldn't be frowned upon, although some Inqs might joke about the influx of Daala (or whatever) related articles. Chack Jadson (Talk) 19:41, 20 June 2008 (UTC)

Just to let you know, certain types of objections on the FAN page are discouraged, and the Inquisitorius were concerned about some of your objections to Kendal Ozzel's FAN. Objections like "Change "He was assigned as the commander..." to "He was assigned to the Executor, the flagship of both Darth Vader and the task force Death Sqaudron, as its commanding officer, with Captain Firmus Piett as his senior subordinate"" are not really what the FAN page is all about. These are things you should change yourself, if you have an alternative to what is currently in the article, and only serve to lengthen the FA page and discourage the nominator. Fixing it yourself would take far less keystrokes. -- AdmirableAckbar (Talk) 13:57, 21 June 2008 (UTC)

Hey. I've deleted the WookieeProject Ambition members category as the associated userbox has not gone through our approval procedure. Though you can continue to use the userbox from your subpage, please don't create categories for userboxes that have not been approved. Thanks. Green Tentacle (Talk) 13:43, 22 June 2008 (UTC)

If users were able to stick their own templates on articles willy-nilly, the admins would get all kinds of users wanting to do it. Since there's already a template (and an established policy involving it) for the purpose you need, there's no sense in creating a new one. Gonk (Gonk!) 11:40, 23 June 2008 (UTC)

No, I don't think they're the same. I haven't read those NJO books, but Daala was in the Maw at the time when Shelter was a Jedi hiding place, so it's doubtful that they could have been in the same facility. I suppose one was built on the edge of the Maw, and the other opposite. Due to the black holes, they were unable to find Daala's hideout without careful searching, and they believed she was dead anyway. Chack Jadson (Talk) 19:01, 28 June 2008 (UTC)

Hey, nice work on the Gorgon article. I did some minor editing for grammar and clarity (there were a couple of cases where it was clear that there was a word missing), hope you don't mind. Doluk 17:43, 30 June 2008 (UTC)

Just a curiousity more than an anything, as I hadn't gotten around to sourcing the tidbits on the Empire's size post-Operation Shadow Hand and just found them edited out - any particular reason why they were removed? They're clear indicators of the progression of the war. I've been updating various area's with information from the Cracken's Threat Dossier, which explains how large the Empire was. Thanks Sinre 20:17, 21 July 2008 (UTC)

I have a question regarding Classic Star Wars. But I should explain it first.

Also Admiral Griff dies when rebels escape the Yavin Blockade in 6 months ABY. This is depicted in issue 17 I believe. Admiral's death date is confirmed by Wookiepedia.

Wookiepedia entries of Hoth, Yavin and Echo Base confirm that rebels escaped Yavin 6 monhts after the Battle of Yavin. The entries indicate that Echo Base first established in 1 ABY and construction took 1 year, completing in 2 ABY. Echo Base was destroyed at Episode V, which takes place in 3 ABY. Also according to the time line of comics entries, Splinter of the Mind's Eye takes place in 2 ABY which is AFTER the Classic Star Wars comics.

Based on the evidence found in Wookipedia I would humbly suggest that we edit Classic Star Wars entries, collection entries and the death of Skorr and S'ybll entries as 0,5 ABY.

I believe that Classic Star Wars is talking about the first establishment of the Echo Base which takes place only a short time after the escape from Yavin Blockade (0.5 ABY). Since the establishment of Echo Base (1 ABY according to the Wookiepedia and 0.5 ABY according to the Classic Star Wars as far as I can read the pages) cannot take place after the destruction of the base (3 ABY) events told in the issues 16-20 cannot take place in 3 ABY.

I am not sure if you have an alternative explanation or source for the exact time line for the events between 0-3 ABY but Wookiepedia's own articles clearly state that Archie Goodwin's Classic Star Wars series take place between the Battle of Yavin (destruction of 1st Death Star) and the establishment of the Echo Base.

I tried to edit the pages but Borsk Fey'lya reverted them back. I posted a similar message to his talk page to inquire this issue but he did not answer me yet. I understand his and your position as a senior Wookiepedian so this time I ask of your opinion. Please inform me because this time line issue really confuses me. Especially I wonder on which basis Wookiepedia dates Classic Star Wars issues 16-20 to 3 ABY.

Could you help me to clarify this situation?

Note: I am just a simple user, and did not edit my page yet so there is no link under my user name. I hope this won't be a problem for you. I would really appreciate your answer. Also if it is appropriate I would like to have an input from anybody participating to this talk page -regarding this issue and if they are willing that is.

Director Thrawn, I have no idea if you'll see this, due to your inactivity for the past month, but here I go.

Project Ambition is practically dead in the water. As a member, I managed to get two Imp characters to FA status. Additionally, your work brought the Gorgon to FA status. So far, those have been the only success stories for this Wookieeproject. There has been a long period of inactivity since. If you have no desire to lead this any further, or if I do not hear back from you in a week's time, I will take over the project and contact the other members to see if there are still interested at all. I'd hate to see the project get trashed, so that's why I've decided to confront you about this. Perhaps the failure of the Daala FA nom discouraged you, but I certainly hope that is not the case. FA noms take time, as I've learned. I'm confident that should this project be revitalized, our main goal can be achieved.

Like I said, I'll give you a week's time to get back to me. After that, I will take control and attempt to start this project up once more. I apologize if it seems I was being rude in this message. That is most certainly not my intent in writing this to you. I hope that you will return to Wookieepedia as an active contributor, and if that happens, I would be more than happy to relinquish control back to you. Grand Moff Tranner

I awarded you with one of the first of these,

feel free to put it were you wish on your page.