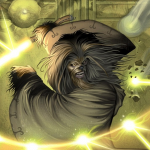 X-7's service for the Empire Edit

Hey there! A while back you said that X-7 was around in 7 BBY. I've search the novels and couldn't find anything. I'm not fully acquainted with them, so could you please shed a little light on the subject? Thanks! --Vandar Tokare42 (Talk to the hand) 06:04, February 11, 2011 (UTC)

Right, 7 oder 6 years before Yavin. In Rebel Force: Hostage is told he served Soresh for seven years, none of his assassinations failed. Nahdar Vebb 09:49, February 11, 2011 (UTC)

Thank you for your outstanding help.—TK-999

Thanks for reconfirming the info, but I haven't yet come across a source that states that Shadow Squadron was formed for "Shadow of Malevolence." Yes, the squadron appears both there and in "ARC Troopers," but it doesn't seem like there's any indication as to which comes first. CC7567 (talk) 03:28, April 25, 2011 (UTC)

Hey Nahdar. Regarding your recent edit to the Temple of Eedit: to which Blue-ray edition are you referring to? The Star Wars: The Clone Wars: The Complete Season Two release, or something else entirely? The reason I ask is because it should be mentioned in the article as the first source to identify the Act on Instinct temple and the "Monster" temple as the same. Also, is there any indication as to the chronology between the two, given the repeated location? Thanks. CC7567 (talk) 01:22, April 30, 2011 (UTC)

Hello Nahdar Vebb, I'm Hunter Kahn, you answered my question about the Battle of Mygeeto. I hadn't looked at the Jedipedia.net version of the Ki-Adi-Mundi article before and, although I don't speak or write German, it certainly looks very comprehensive. Excellent work! Since you obviously know Mundi pretty well, perhaps some time down the road you'd consider taking a glance at the work I've done here on the Wookieepedia version. I plan on eventually nominating it for FA. I have just finished my major expansions on the in-universe stuff, so I still have to do P&T, P&A, BTS, and I plan on doing a thorough read through/copy edit. But if you get the chance to take a look and had any suggestions or anything to offer, it'd be appreciated! — Hunter Kahn 23:31, September 25, 2011 (UTC)

How about you write Droidbait for Wookieepedia, too? :P As far as I'm aware, the Citadel Obstacle Course is the same thing (an alternate name) for the Citadel Challenge. Hope that helps. On a side note, I forgot to ask you when I was getting the info on Yos Kolina, but is Rex in The Clone Wars: Warriors of the Deep? If he is, would you be able to send me the passage in which he's mentioned? Thanks, as always. CC7567 (talk) 00:45, August 9, 2012 (UTC)

Hey, Nahdar. We've spoken already, but I just wanted to say thanks again for your support on the RFB nomination. To the Heroes of WP:TCW. :P Toprawa and Ralltiir (talk) 05:53, January 11, 2013 (UTC)

Hey, Nahdar. Thought I would just post this here. As you requested: "A battered Obi-Wan arrives on Coruscant, having not only succeeded in his mission to find the source of the chemical weapon that the Confederacy used on Ohma-D'uh, but also carrying the weapon's antidote. Tragically, four other Jedi died in the effort, leaving only Obi-Wan to tell their tale. By Obi-Wan's account, after he traced the chemical weapon to the volcanic planet Queyta, he found himself allied with four Jedi: Knol Ven'Nari, Jon Antilles, Nico Diath, and Fay. Each was considered a living legend, and it was Obi-Wan's first meeting with all of them. Unfortunately, when the group infiltrated a Queyta chemical factory, Durge and Asajj Ventress were already there, preparing to take the antidote and scuttle to the factory's laboratory. Although Obi-Wan recovered the antidote and survived the battle that ensued, he hardly feels victorious. If anything, he is more determined than ever to help bring the war to an end." Toprawa and Ralltiir (talk) 03:20, January 1, 2014 (UTC)

Hey Nadhar, here's the questions I promised you. Sorry for the delay.

Hey, <insert name here>, due to CC’s indefinite absence, I’ve been given the green-light to take over WP:TCW as Project Leader. As Project Leader, I’m committed to this supervisor role that oversees the maintenance and expansion of all things relating to TCW.

As a participant of the project, I would like for you to take the moment to consider your current status. Any inactive or otherwise uncommitted member, for whatever reason, is subject to removal from the participant list, as noted by CC.

If you’re unsure or not committed, please reply to this message on my talk page or kindly remove your name from the list. Mind you, there’s no hard feelings—you are most welcome to rejoin anytime. As the largest WookieeProject in terms of status articles and participants, and because of TCW’s ongoing popularity, we could use the help. :P

Retrieved from "https://starwars.fandom.com/wiki/User_talk:Nahdar_Vebb?oldid=8251812"
Community content is available under CC-BY-SA unless otherwise noted.