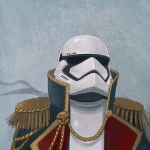 Hi this is a reminder that the spoiler policy mentions that information from TV episodes may only be posted upon the episode's initial Eastern Time Zone airtime. Even though the episodes are in the app they still need to air on the east coast. Thanks--DarthRuiz30 (talk) 17:45, October 7, 2018 (UTC)

It's done. Note that you can tag images with {{Delete}} just as you would regular pages, just make sure to include a link to the superior image, like so: {{Delete|Obsoleted by [[File:Filename.jpg]]}} Imperators II(Talk) 05:43, October 9, 2018 (UTC)

I don't have the TOR encyclopedia, but I'm aware of NPCs wearing Mantellian uniforms who are in some way identified as Republic personnel. I will remove Fort Garnik as the headquarters in the infobox, as I don't actually think there's anything that says that. However, that codex entry does make a distinction between the "government-backed military" and the mainstream Republic Army. I'm open to discussing this further though. Fan26 (Talk) 15:06, October 13, 2019 (UTC)

Hello, NanoLuuke. I just read your comment on IRC addressed at spookywilloww, and I wanted to tell you that, no matter your personal likes or dislikes regarding Wookieepedia policies, you trying to make other editors feel bad about following the site's policies will absolutely not be tolerated, and, if repeated, may result in administrative action against you. Consider this an official warning. Thank you. Imperators II(Talk) 23:00, February 3, 2020 (UTC)

Oh wow, I haven't visited that page in ages. Yeah, I removed the members list. Thanks for the heads up. Master

Thanks for the reminder. I was having trouble with the Wayback Machine though, so would it be imposing of me to ask you to handle it? You have been doing a lot of this. I'll definitely remember that in the future, though. SilverSunbird (talk) 18:24, March 18, 2020 (UTC)

Hi, NanoLuuke. I was aware of the policy, and was in the process of archiving the site when I got called away and had stuff to deal with in real in life. I have updated the page with the archive link. LadyVader1005 (talk) 21:21, March 19, 2020 (UTC)

Sorry for not sourcing Elizabeth Rodriguez's birthdate in her article. I learned to not cite Wikipedia and IMDb as sources, and for that reason and put the "Gone With a Trace" credits as a source to her involvement in the franchise, but I believed that it was fine leaving her birthdate listed like it's mentioned in Wikipedia, IMDB among other sites because if all websites list the same birthdate, then it must be her real birthdate. With all the messages she receives on Twitter, t's impossible to ask her when she was born.

That said, by making an article for Rosario Dawson, then which website you could recommend me to list as a source? Because we have articles for days, months and years to list birthdates, events and releases.

Want to talk about OolaEdit

Oh so I need to make 50 edits before I can add photos on here I thought is was some kind of glitch. Craziness Grows (talk) March 27 9:00 (UTC)

I am quitting I am not going to do the 50 edits. Something got removed so I am leaving I am going to delete my account if that is possible. Now that information that I found about Oola it will never make it on here. I am running and leaving from this site infact I should have never come here the first place.

I am leaving because of someone named User:Zed42 because of an edit made to Harc Seff. Maybe someone else will add Oola's information from the fact files and books but mostly likely not. It's not going to be me because I am done. Craziness Grows (talk) March 28 7:56 (UTC)

Retrieved from "https://starwars.fandom.com/wiki/User_talk:NanoLuuke?oldid=8942875"
Community content is available under CC-BY-SA unless otherwise noted.