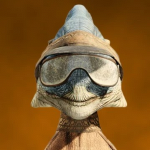 Is there a reason why you removed my additions to the Sith Master page. They're all Sith Masters and I've seen characters from SWTOR on Canon pages, so why is this any different? Andrewh7 (talk) 08:53, January 9, 2020 (UTC) Andrewh7

So basically I have to add the same infobox to the Legends page only with the non-canon characters? Why not just merge the two? Seems like it would make things easier on everyone. What is ROSVD and does it say what characters are canon on it (if it's a page on the wiki)? Andrewh7 (talk) 09:20, January 9, 2020 (UTC) Andrewh7

We typically switch to the latest appearance for the infobox image. If it doesn't look that good, we'll have to discuss this with the admins. Shayanomer (talk) 06:33, March 17, 2020 (UTC)

Well, as explained in the BTS section of the article, most of the Battlefront weapons, which include the mine, can be used by all factions in the game, but I don't think that necessarily means it was actually used by all of them. For example, in the game, battle droids can wield the SE-44C blaster pistol, which we know was built for the First Order officers. We need solid proof to associate the weapon with one particular faction. See TL-50 Heavy Repeater or K-16 Bryar Pistol, for example.

Yeah, I'd say the same applies to the 2015 Battlefront as well. At least that's the precedent we've set with status articles such as EE-4 carbine rifle and CJ-9 electrified bo-rifle.

Hi, just thought I'd let you know that it turns out Scout transmitter has a body with a length of 174 words, meaning that, as it is above 165 words, it needs to be sectioned. Depending on how much the word length changes after sectioning is introduced, this may require it to go to GAN. Zed42 (talk) 02:55, April 13, 2020 (UTC)

Hello Ratts. Thanks for creating Gordy Haab and Stephen Barton. Could you please add references for their date and place of birth. Thanks. --NanoLuukeCloning facility 11:00, April 16, 2020 (UTC)

Hi there, please remember to include backup links in any links to external sites that you add, such as the link on Mandalorian force-wielder prison. This is required as per Wookieepedia:Sourcing, rule 10. Instructions for adding backup links to {{cite web}} can be found on the template help page. Cheers, 1358 (Talk) 21:18, May 1, 2020 (UTC)

Please, don't add references to Year/Month/Day articles, as it's one of the few case were the reference is to be provided on the page were the information applies (person, document, etc). Also, Day articles are featured on the home page, and references on the articles will cause a "missing reference template" message to appear. --NanoLuukeCloning facility 11:35, May 2, 2020 (UTC)


A message from the AgriCorps Edit

Hi, I'm reaching out to you on behalf of the AgriCorps. You're receiving this message because you have nominated at least one GAN this year while reviewing fewer than two GANs per each of your nominations. As you know, the GAN is a community project that can only operate when Wookieepedians both nominate and review articles. We therefore encourage you to review more GANs. Not only is this an act of giving back to the community, but reviewing others' articles is the best way to improve your own article writing as well. We look forward to seeing more reviews from you! Cheers, 1358 (Talk) 20:00, May 16, 2020 (UTC)

I have a question. Why is it that on the clone trooper officer page, that some of the edits that I did are ok like ponds or CT-0292, and others are not like colt and havoc. And why is it others like thorn are okay, and I didn't do those ones. —Unsigned comment by Spacedragon69 (talk • contribs).

I wouldn't say that just because one came from there, the whole species did. Its probably likely to be the case but the source doesn't specifically say that the species does --Lewisr (talk) 00:24, May 23, 2020 (UTC)

Hi, A clone lieutenant is a lieutenant nonetheless. They are lieutenants of the Grand Army of the Republic. I keep switching it to Jesse because he is the most well known Lieutenant in all of Star Wars. This random First Order person you put is an unknown character that very few know, or care about. Just leave it as a character people recognize.—Unsigned comment by 73.15.88.187 (talk • contribs).

Hi RattsT, I have uploaded a video of the Mary Holland Twitter post File:Wild Horsie Mary Holland.png and placed it in Category:Screenshots of social media posts. Have a good weekend. May the Force be with you. Andykatib 07:36, June 14, 2020 (UTC)

Alright, thanks for the conformation! I was definitely confused about that, as some pages had the non-canon appearances while others didn't. I'll be sure to go back through the pages I edited and fix that. Thanks again. --KingWookiee (talk) 03:40, June 18, 2020 (UTC)

Hi, I noticed you have a link to "Sleeper (Mustafar)" on your user page. If all goes according to plan that should be moved to "Sleeper" soon, so you might want to update that link. SilverSunbird (talk) 17:59, July 4, 2020 (UTC)

If information is shown on the LEGO Star Wars site (e.g. Box Art), then that means it is final. I don’t see how that information would be unverified.--Hisillustriousness (talk) 13:27, July 15, 2020 (UTC)

Thanks for the suggestion! I had forgotten about section quotes, so the advice was much appreciated. :) I have now re-added the quote to the Personality section. Hope this helps! Wikikinetic (talk) 11:36, July 16, 2020 (UTC)

I got the information from the Star Wars website. There’s a page on the Vanguard Squadron that has some information about them including the information I added. Same with the Titan Squadron. Andrewh7 (talk) 05:14, July 24, 2020 (UTC) Andrewh7

He used knockout gas in one of the CW episodes. I don't know the exact one but I could find it.

Hi, I recently added a page called Savannah grass. I got a message saying that I didn't have any source. So I tried to fix the problem and would like to know if I did it correctly. --BurritoStarDestroyer (talk) 01:20, July 28, 2020 (UTC)

Hi, I recently added a page called Savannah grass. I got a message saying that I didn't have any source. So I tried to fix the problem and would like to know if I did it correctly. --BurritoStarDestroyer (talk) 01:23, July 28, 2020 (UTC)

Hi, I recently added a page called Savannah grass. I got a message saying that I didn't have any source. So I tried to fix the problem and would like to know if I did it correctly. --BurritoStarDestroyer (talk) 01:23, July 28, 2020 (UTC)

Ratts, thanks for telling me not to add names in info boxes. also the fleet composition article should be re done bc its outdated. at the battle of batuu the rebels had many more ships and it should be stated exactly how many of a ship was ever used in the resistance. —Unsigned comment by CadeSkywalker123 (talk • contribs).


A murder of lizard-crows Edit


It's not a speculation Edit

I don't think it's necessary to removing this part, it was there for almost a year, as for the speculation, you can clearly see that maul's cybernatic legs were damaged, and the director of the show several times said that kenobi was expecting maul to use the same hilt bumping move that he used on qui-gon, you can see it in youtube -- Rebels Recon #3.20: Inside "Twin Suns" | Star Wars Rebels ---

And he says this in another interview ;

the fact that maul was traveling in the desert and the fact that his legs were damaged because of it is not a speculation, it's a fact, he even says that before he was lost in the desert and fall on his knees while searching kenobi, and that ezra and his droid almost died because of the harsh environment in the same episode, and the other thing is about maul's attack on kenobi, it's clear that it was an unorthodox duel, where they exchanged lightsaber stances until maul tried to hit kenobi with his lightsaber hilt, it's the same move that he used on qui-gon to kill him, I don't see how this is a speculation, we don't even need to hear about the directors to know this, but I showed the director statement to you so there shouldn't be any discussion about it. --Marco 1907 (talk) 16:09, September 27, 2020 (UTC)

Retrieved from "https://starwars.fandom.com/wiki/User_talk:RattsT?oldid=9418519"
Community content is available under CC-BY-SA unless otherwise noted.