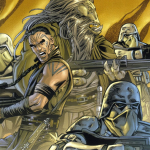 Hey there. Please see the last paragraph of Swan's "Behind the scenes" section. Ma'kis'shaalas's Behind the scenes section also has a good explanation. Leland also lists Labyrinth of Evil as taking place at 18 BBY in his blog, and The Unifying Force at 28 ABY. Like the date he gives for the Conclave on Kessel, they're mistakes. Cheers. Menkooroo 18:40, January 8, 2012 (UTC)

Feel free, just make sure to replace one of the old ones. And crap, sorry, I just realized I didn't reply to your other message. I used to have an image of that Geonosis Jedi uploaded to my age-old angelfire account, but I can't seem to access it anymore. The best I could do would be a low-quality screenshot from the film. I can grab one within the next couple of days if you'd like. Menkooroo 03:39, January 23, 2012 (UTC)

Hey there! Please don't remove redlinks from articles, as you did here. Redlinks should be filled in, not removed. Cheers. Menkooroo 20:17, January 24, 2012 (UTC)

Since we only do this when there's only an amount of {{Nc}} appearances, it is not necessary to give a non canon appearance its own section if there's only a few in the appearance section. Hope this helps, JangFett (Talk) 15:50, February 11, 2012 (UTC)

I understand that you copied, and I accept your apology, but it's not nice, to see other people copy things that I did, while I put there a lot of time. I spend weeks to make it better and new information, and then to see this, is a bit dissappointent. --Station7 16:07, March 8, 2012 (UTC)

I reverted your edit because your change is more complex than simply changing the template to {{Flash}}. The Hurst article is one of Wookieepedia's Good articles, meaning that it needs to adhere to all of our site's policies found in the Manual of Style and Layout Guide to retain its status. One of the requirements of the Layout Guide is that for items in an article's Appearances and Sources sections, the article must specify the subject's "first appearance" and/or "first mention." One of the results of your edit is that the article is no longer specifying the subject's first mention because you replaced the {{1stm}} tag with the {{Flash}} tag. I cannot verify myself whether Path of Destruction is a "mention only" or a "flashback" appearance in regard to Hurst, so I took the safe route and simply reverted to the article's original version. If PoD is indeed a flashback appearance, then it requires the {{1st}} template and would look like this: (First appearance) (Appears in flashback(s)). Toprawa and Ralltiir 05:31, April 26, 2012 (UTC)

Hello. I'm wondering where in the novel (what chapters) you found all these characters you put into appearance section. I know I read this novel back on 2008 and add a lot of missing appearances while I progress thru. You know they needs to be mentioned by name in the novel if you add - (Mentioned only) - taggs to them. Otherwise if they're only hinted like f.e. someone's father, mother, sister, brother, we got - (Indirect mention only) - tag for that purpose.--Jedi Marty (talk) 22:00, June 29, 2012 (UTC)

To be honest, I'm not sure we can assume that it's a Jedi training cruiser, much less the Crucible. I realize that it was destroyed on Florrum, but I'm not seeing much resemblance between the wreckage in "Revival" and the actual ship. Also, we would need official confirmation to say that the remains of the Crucible were brought to Ohnaka's pirate base, since it's not very clear from "Revival" or "A Necessary Bond." CC7567 (talk) 22:51, December 1, 2012 (UTC)

TCW - Shades of Reason, The LawlessEdit

Apologies about that, it missed my eyes entirely. Please make sure next time, though, to reload the new infobox, since there were some dangling fields left from the {{Dathomiri character infobox}}, which has some different parameters. Again, sorry about the confusion. CC7567 (talk) 21:59, February 23, 2013 (UTC)

Greetings. I noticed you have Star Wars: The Clone Wars: The Complete Season Four in your collection. May I ask if you own the DVD or the BlueRay-Version? I would need the information about Bulduga in the latter one to update him. Thanks for your time. Clone Commander Lee Talk 10:55, March 30, 2013 (UTC)

Hello, and thanks for reaching out to me. Neither your account nor your user subpages have been "locked" in any way, the latter have just been redirected into your base user page. All you need to do to restore them is: 1) go to the edit history of the page you want to recover, and 2) undo the edit in which they were redirected to your user page. Hope this helps, Imperators II(Talk) 10:50, January 24, 2020 (UTC)

Retrieved from "https://starwars.fandom.com/wiki/User_talk:Ressor?oldid=8796226"
Community content is available under CC-BY-SA unless otherwise noted.