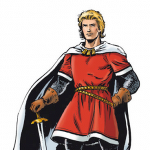 I didn't put YOUR specific name in there, I just put in Template:USERNAME. It basically replaces {{USERNAME}} with your user name.—B-Boba Fett! Bounties collected

A note about redlinks and bullets Edit

Redlinks should not be removed from articles; rather, they should be created. So unless you had a good reason for recently removing certain redlinks from articles (which must be specified in the edit summary), links like "Elaine Lee" and "Esther Scott" should remain. Additionally, bullets should not be used in the "Behind the scenes" section, as you did for Ann and Tann Gella articles. Grand Moff Tranner

Whenever you create new articles, please make sure to include {{Eras}} template, respective Stub template and a correct category. Those things are important. Thank you. MauserComlink 19:01, February 7, 2010 (UTC)

Look for the Upload file link on the left hand side of the screen. Loneshark1138

The Iego council article has nothing to do with Legos. Iego, with a capital i, is a planet. Grand Moff Tranner

Hey there. Thanks for creating the disambig pages. I just wanted to let you know that after creating them, you should go to each of the articles listed in the disambig page and add the disambig template. This will keep things nice and tidy. I have already done so on Marka Ragnos's article to give you an example. Thanks. Cylka-talk- 22:26, February 20, 2010 (UTC)

Promoting articles to Good or Featured status requires a lot of work, which includes a nomination process after the majority of the work is completed. At the top of both the Featured Article nominations page and Good Article nominations page are guidelines that articles have to meet before they can be nominated for either status. A more in-depth list of requirements for Featured Articles can be found here. I hope these help answer your question; if you need any clarification, please feel free to ask. Grand Moff Tranner

Re:Helping me with Good and Featured articles icons on Prison Break Wiki Edit

I'm afraid I'd be of no help. I'm not very good with coding and the like. Grand Moff Tranner

RE: Helping me with Good and Featured articles icons on Prison Break WikiEdit

The {{Eras}} template requires JavaScript added to the wiki's MediaWiki:Common.js top work. When I get home in a few hours, I'll leave instructions on what to add on your talk page there. Cheers, Grunny (talk) 06:17, April 23, 2010 (UTC)

Well if i were you i'd first read my brackets with the bullet points and james potter and the secret message on harrypotter wikia --philered 11:26, April 25, 2010 (UTC)

Just so you know, you're cruising to get yourself blocked by an administrator. It very clearly states on the upload page, in bright red and (depending on your browser) blinking letters, that any Google is NOT a valid source and that any uploads with Google anywhere in the description/source will be deleted and the uploader will be blocked. Ye be warned. - JMAS

RE: Escape from Kadavo article Edit

Hello. Thank you for contributing, but there are two issues regarding your new article on the Clone Wars Comic. You misspelled the article title as Kavado, and the comic page already exists under Star Wars The Clone Wars 6: Slaves of the Republic - Chapter 6: Escape from Kadavo. Again, thank you for your effort, but it your article will be deleted because it is redundant. Corellian PremierAll along the watchtower 15:38, May 14, 2010 (UTC)

Hello. I'm Master Fredcerique, founder of WookieeProject Real World Music. I notices the userboxes on your page that suggested you were a Star Wars music fan. If you would like, you could help the project enhance Wookieepedia's music articles. If you don't, I don't mind. Thanks and God bless! Master Fredcerique | (Talk) 13:15, September 21, 2010 (UTC)

Hello. I was wonderin' if you might wanna adopt an article to bring up to GA/FA status for WP:RWM. The project could use some help. Just go to the "Works in progress" section on the project page and add an article to the list. Then sign you name with three tildes. Thanks and God bless! Master Fredcerique Begun the Clone Wars has † 21:22, September 25, 2010 (UTC)

How do you get the things on all of your info ex;your birth year??

What do i copy tell me plz.

Please give the image files you are upload a useful and productive name. Uploading a book cover image with the file name is 9781409390282.jpg is completely pointless. A proper and useful file name for that would be BadGuysAndBountyHunters.jpg or something similar. - JMAS

Hello there Stat7! Just wanted to remind you that you've been inactive as a member of WP:RWM. It's my job as founder and head of the project to help keep people active in the project. Thanks for your time and God bless! MasterFred

No worries, I will add the conjecture tag shortly when I save my current edit. Also, please be careful when leaving messages on talk pages - your edit to leave your last message removed the entirety of my talk page as can be seen here in this edit. Using the "leave message" tab can be helpful in avoiding this type of mistake. - Cavalier One

Hey Stat7! Just to let you know that when you add an inuse tag to an article (Lando's Palace), you must actually be making a major edit. In other words, wait to put the tag on until you're making the edits. And, you might want to change "soundtrack" on the article to "theatrical motif" as a soundtrack is the CD while the motifs are the pieces of music written to represent an object. Also, I noticed on your page that you say you have no friends. Well, not anymore. :) MasterFred

I would love to. I kinda planned on making that a WP:RWM project-wide project. I definitely would love to see it become an FA. MasterFred

Per WP:LG, {{Youmay}} goes below {{Eras}}, not above it. Please stop moving it above {{Eras}}. Thanks. Master Jonathan

Thank you for your edit on the Pop Tarts wiki! I am happy that the community over there is growing!WIERDGREENMAN 18:33, January 13, 2011 (UTC)

Hi, I would ask you to add some edit summaries, especially when asking some pages deleted or other that requires quick action. A simple "CSD" or "Delete" when adding the delete template would suffice well. (: –Tm_T (Talk) 11:07, April 16, 2011 (UTC)

All done. Sorry for the delay - I was away at the weekend. - Cavalier One

Re: Manner of death Edit

I have no idea. I have only read The Traitor's Gambit, and he is alive and well at the end of it. QuiGonJinn

Heya. You don't need my permission to do minor things like adding a bullet. I don't own the article. However, her name is spelled as it was in the source. Why did you think it was wrong? NaruHina Talk

Hi there. I wanted to make my own, but I didn't know how to, so I just copied the text from your one, and I going to replace it all with my own. I apologise for not saying anything abouty it in advance. I hope it's ok. Ressor 16:05, March 8, 2012 (UTC)

Hi, I noticed the table was broken, so I took the liberty of fixing it, but then someone else reverted my edit back. If it's okay with you, I'd like to change it back. OneWeirdDude (talk) 01:23, January 10, 2017 (UTC)

Hey, Station7, thanks for defending my page! You can let it go, though. Hozer will likely be blocked soon enough, and there's no point in edit warring. To quote Twain, "Never argue with stupid people, they will drag you down to their level and then beat you with experience." :P - Cwedin(talk) 23:41, December 4, 2017 (UTC)

Retrieved from "https://starwars.fandom.com/wiki/User_talk:Station7?oldid=8261086"
Community content is available under CC-BY-SA unless otherwise noted.