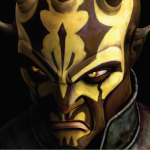 i love general grievous and he is really good fighter considering he dose not have the force but his armor also helpsLordsheelal 20:39, March 13, 2012 (UTC)lord sheelal

shadow emperor, honda ohnaka appeared in star wars the clone, ergo he canon, do you agree or disagree.

Hey Shadow Emperor. For our purposes on the site, all of the info from the Untold Clone Wars Panel, whether it was shown in animatics or stated by the panel members, is not considered canon. The panel info and materials are "unfinished" works and concepts that were not released in a completed, canon form—in comparison to the four Legacy products, which were released in a completed form, whether in story reels or otherwise. Hope that helps. CC7567 (talk) 02:34, July 9, 2015 (UTC)

Retrieved from "https://starwars.fandom.com/wiki/User_talk:The_Shadow_Emperor?oldid=8549580"
Community content is available under CC-BY-SA unless otherwise noted.