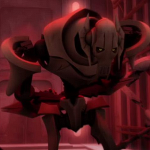 Your category for individuals killed by Darth Maul has been deleted. We do not, and will not, have categories like that. Grand Moff Tranner

Can you post on the page of "Missing in Action" that the episode was written by Brent Friedman and directed by Steward Lee, please? Thank u.

According to the block log, you have not been blocked recently, and I have not blocked anyone recently except Detreko. I'm not sure what log you were checking, but no, I did not block you. Cheers.—Cal Jedi

Hey XXL, please use an official source when sourcing that subtitle in the TCW season five article. Otherwise, it will be regarded as speculation. Do you know where it came from other than that wiki? JangFett (Talk) 15:59, January 9, 2013 (UTC)

Can you add on the page for the "Clone Wars" episode, "The Lawless" that R2-D2 makes an appearance?

I am sorry for changing the picture of Dathomir. --Unsigned comment by Darth Hill.

Yes I do. But just because those episodes form a story arc does not mean we can assume that they were produced in that order. A number of arcs in previous seasons were produced out of chronological/airing order. — DigiFluid(Whine here) 18:10, January 17, 2013 (UTC)

Can you please post on the page for the upcoming "Clone Wars" episode, "The Lawless" that R2-D2 makes an appearance considering the book "Shadow Conspiracy" says so? Pleeasse?!?!?

here is the location:www.cartoonnetwork.com/schedule. Now just click on tomorrow's schedule and click the bar with the clone wars and you'll see "The Lawless" airs on February 2nd.

you're welcome but I also meant post the air date on the page of the episode "The Lawless" not just the page for "The Clone Wars: Season Five".

Can you please post on the page of the upcoming "Clone Wars" episode "The Lawless" that it airs on February 2nd and respond to my message? Pleeeasseee????

Hey there, could you start uploading pictures in PNG instead of JPG? It would make the replacement process (for the Blu-ray version) much easier. Thanks in advance. Alexrd (talk) 13:05, January 21, 2013 (UTC)

It was removed because the citation was for the CN schedule. The CN schedule does not list the production number, thus the citation is incorrect. If the TCW site lists it, that is what should be cited. — DigiFluid(Whine here) 11:13, January 24, 2013 (UTC)

That site is nowhere near official. It's run by SuperShadow, who isn't an affiliate of Lucasfilm in any sense of the word. (This is why third-party, non-Lucasfilm-affiliated websites may post official information, but it's not a blanket rule.) CC7567 (talk) 14:21, January 26, 2013 (UTC)

Please try not to take the comments personally. The reason that people are leaving objections to the article in that manner is because usually—not always, because there are always exceptions, but usually—the person who nominates an article as a GAN or FAN is expected to be in a position to handle the objections, whether they be about the article's source coverage or the writing/formatting of the article itself. The nominator is usually the person who dedicates himself or herself to improving the article, and reviewers direct their objections toward the nominator. All articles are expected to adhere to all of the rules at the top of the GAN page prior to nomination, which is why criticism might seem rather harsh. If you have any other questions, I'd be happy to answer them for you; please just take note of that's how the GAN page operates. CC7567 (talk) 18:08, January 27, 2013 (UTC)

You should fill the picture upload form properly, when uploading new pictures. Don't leave them like this. Alexrd (talk) 19:10, January 30, 2013 (UTC)

Hi, I've got my own Star Wars wiki called the Bountypedia Wiki. But hardly anyone is on it, please could you tell me how to make it a popular Wiki?

Hey XXL, please try not to add blank sections into articles. You can add sections within articles, but try to add content within those sections. It not only does not look right, it does not help the article in any way. Thanks, JangFett (Talk) 15:34, February 1, 2013 (UTC)

Try to avoid adding in miscellaneous and trivial information about TCW episodes in a behind the scenes section. Over the past few months, typically some users have been adding in bts information from SW.com. While that seems fine and well since they're sourced to SW.com, we do not need to go any further and actually add who or what appeared in the episode in the bts. Hope this makes sense, JangFett (Talk) 21:32, February 20, 2013 (UTC)

Your comment on Cade's talk page is erroneous. His plurality is quite accurate because I don't do pictures in Appearances either. Admittedly, I don't do most things either because my only interest is adding links in articles. Whether the rest of the users do or don't is irrelevant. The fact that there is one other person who also doesn't justifies the plurality. I propose we first ascertain whether Cade means "we" as the site as a whole or "we" as himself and the others whom he has encountered who don't. For all we (by which is meant you and I) know, Cade could be using the royal "we", implying himself and the power endowed by Divine Right. Or he could have a split personality. Do please be careful. Assumptions are the foremost contributors to misunderstanding. Karohalva (talk) 17:18, February 26, 2013 (UTC)

This is the link you are looking for: http://starwars.wikia.com/wiki/Wookieepedia:Requests_for_user_rights Make yourself heard. Spread the word. Anonnonnon (talk) 14:23, February 27, 2013 (UTC)

Hey, XXL, you were dangerously coming close to violating our no personal attacks rule in Cade's request for rollback nom. Just keep it civil. Thanks :) JangFett (Talk) 19:17, February 27, 2013 (UTC)

Retrieved from "https://starwars.fandom.com/wiki/User_talk:XXLVenom998?oldid=7689085"
Community content is available under CC-BY-SA unless otherwise noted.