"I swore a vow to General Hoth. I promised I would not rest until the Sith had been cleansed from the galaxy. I still intend to honor that vow."
―Valenthyne Farfalla[src]

Valenthyne Farfalla was a noted male half-Bothan Jedi Master and Jedi Lord who served the Jedi Order during the New Sith Wars. Farfalla had a reputation for being foppish and vain. He aided Lord Hoth and the Army of Light in the Ruusan campaign, in the final years of the New Sith Wars. In the last year of the battle, Farfalla left Ruusan to gather three hundred followers to aid in the struggle for the world.

Farfalla was often at odds with Hoth, and when the latter's good friend Pernicar was killed by the Sith, he blamed Farfalla and the two men had a falling out. However, they eventually repaired their relationship and rallied the Jedi for a final assault on the Sith stronghold. When Hoth and many other Jedi were killed by Lord Skere Kaan's thought bomb, Lords Farfalla and Berethon were the highest-ranking Jedi to survive Ruusan.

Farfalla continued to serve the Jedi Order for a decade, until he was killed by Darth Bane in a lightsaber battle on Tython.

"Jedi is as Jedi does, Lord! And if he has taste…"
―Farfalla[src] 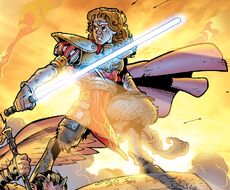 The son of a noble Jedi Lord, Valenthyne Farfalla's father was convinced to ally with the Galactic Republic by Jedi Master Pernicar.[3] The young Force-sensitive Bothan hybrid followed in his father's footsteps, training in the ways of the Force within the Jedi Order and inheriting his father's lordship over a region of space he was sworn to defend from the Sith Empire.[2]

In 1010 BBY, Jedi Master and Lord Hoth departed Coruscant and rallied the banners of the Jedi Grand Council, summoning all Jedi Lords and their followers to form the Army of Light to combat the threat of Skere Kaan and his Brotherhood of Darkness. Commanding a legion of a hundred Jedi Knights and two hundred more loyal servants, Farfalla joined Hoth's Army aboard his ornate, wroshyr-wood hulled battleship the Fairwind.[2] During the decade of fighting, Lord Farfalla fought alongside the Jedi Kopecz before his defection to the Brotherhood.[4]

Because of his well-manicured appearance Lord Farfalla could often be underestimated as a military threat, particularly by Lord Hoth, with whom, due to their widely differing personalities, he was often at odds. But despite his reputation amongst some, it was Farfalla who warned General Kiel Charny of Githany's impending defection to the dark side, saving the Jedi Knight from death.[3]

Farfalla was considered for the role of Supreme Chancellor; however, he refused it in order to serve in the Ruusan campaign. As a result, Tarsus Valorum was appointed to that role, as the first non-Jedi in 400 years to serve as such.[1]

When Hoth began his attack on Ruusan, Farfalla was one of the first Lords to rally to his side and would go on to fight in nearly every battle on the world, and his skill did not go unnoticed among the Sith. As the campaign ground to a stalemate, Hoth realized he needed the aid of the Jedi who had not chosen to join him. Farfalla believed that Hoth's blunt personality had driven them away, and expected that he could persuade them with more diplomacy and tact. In 1000 BBY he volunteered to leave Ruusan to request help from Jedi throughout the galaxy and return with three hundred Knights.[4]

Farfalla would be gone for several months, in which time he led the three hundred Jedi against King Lahzar, then took his forces on to Ruusan.[3] The Sith had established a blockade around the planet, which prevented Farfalla from landing on the planet's surface. In a stroke of fortune for the Jedi, Darth Bane went behind the back of Lord Kaan and ordered the Sith fleet to engage Farfalla's ships, giving Farfalla his opening to break through to Ruusan.[4] There, he once again saved Charny's life, riding his golden warship into battle to defeat the attacking Sith.[6]

His arrival was not welcomed by Lord Hoth, however, who called Farfalla a "mincing coward". That Farfalla had arrived just too late to save Hoth's good friend Pernicar only added to the resentment between the two men, and in a fit of anger, Farfalla returned to his ship, vowing not to help Hoth for what he saw as a grave insult, and also fearing that Hoth's personal conflict with Kaan and the death of Pernicar had pushed the general to the dark side of the Force. However, when an image of Pernicar came to Hoth in a dream suggesting he mend his relationship with Farfalla, the Jedi sent a message via Farfalla's envoy apologizing for his behavior. The two came to a truce and joined forces to launch a final assault against Kaan, who had fled to the safety of the hills and caves. Though both Jedi suspected a trap, they elected to pursue.[4]

"Promise me death, Farfalla, and receive a warning in return."
"You wish death, Dark Lord? Just say so!"
"Death is an old friend. What Kaan plans for all of us is worse!"
―Kopecz challenges Farfalla[src]

Farfalla led the advance group of Jedi at the Seventh Battle of Ruusan to engage the Sith forces, while Hoth traveled closely behind, intending to continue on to the caves to apprehend Kaan. The battle was over quickly, with most Sith surrendering to the Army of Light. During the battle, Farfalla captured the Dark Lord Kopecz, who told him that Kaan was planning to detonate a thought bomb, a devastating burst of Force energy that would eradicate any army caught within its blast range. Farfalla fulfilled Kopecz's wish to die by granting him a lightsaber duel, then rushed to inform Hoth.[3] Hoth already knew, as he had felt it in the Force, but decided he had to stop Kaan and took ninety-nine volunteers with him. He ordered Farfalla and his forces to flee the area, and if possible, leave Ruusan, hoping to give them a chance to escape certain death. While a traumatized soldier later told Darovit that all the Jedi had been killed, Farfalla was well out of range when Kaan detonated the thought bomb, and so survived the Ruusan campaign, rallying the surviving Jedi to defeat the Sith stragglers and finally ending the thousand-year New Sith Wars.[4]

Following the death of Lord Hoth, Farfalla became the last commander of the Republic military before the Ruusan Reformation. He also regularly conferred with the Jedi High Council.[1]

Farfalla commandeered the rescue missions from the Fairwind, sending teams like those aboard Star-Wake to Ruusan. Later, Farfalla met with Supreme Chancellor Tarsus Valorum on Coruscant, where the two agreed to the Ruusan Reformations. Following the meeting, Farfalla put Johun Othone in charge of Valorum's security detail, and knighted the young Padawan, whom he'd taken as his own following Hoth's death.[1]

For a decade, Farfalla continued to head various operations of the Jedi Order. Although he had dismissed rumors of a surviving Sith Lord from Ruusan over a decade prior, Farfalla eventually was convinced a Sith Lord still existed when Darovit came forward with information. However, before Darovit could speak with them, the disguised Darth Zannah took her cousin with her to Tython, to avoid being revealed and caught by the Jedi.[1]

Farfalla, Othone, Raskta Lsu, Worror Dowmat, and Sarro Xaj pursued the Loranda aboard the Justice Crusader, where they came to Tython and engaged in a duel with Darth Bane and Darth Zannah. At first, thanks to Worror's battle meditation, the duel was in the favor of the Jedi. However, after Worror lost his concentration, the Sith Lords easily took control of the fight.[1]

Farfalla was killed after Bane disarmed and subsequently decapitated him. Farfalla's lightsaber was taken as a prize for the victory.[1]

Following Farfalla's death on Tython, the Jedi High Council, alerted to the existence of Darth Bane by Caleb of Ambria, sent a team of Jedi—led by Master Tho'natu, and including Master Obba—to destroy him. Outside of Caleb's home on Ambria, the Jedi discovered the healer's cut up corpse, and inside they found the lightsaber hilts of the slain Jedi. Tho'natu announced their presence and they were instantly assaulted by a deranged Darovit wielding Farfalla's lightsaber, whom they assumed to be the injured Bane. Slaying him, they deemed that the Sith were extinct and returned the lightsaber hilts and the decimated corpse of Caleb to the Temple.[1]

After returning to the Temple, the Jedi created a memorial to Caleb and the Jedi who had been killed by the Sith Lord. All five Jedi's lightsaber hilts were set into a large white stone block in the gardens around the base of the Tower of First Knowledge. Under each hilt was a depiction of its wielder, along with their name.[7]

An asteroid belt in the Ruusan system was named Farfalla's Diamonds in his honor.[8]

Hoth: "Why should they listen to you any more than me?"
Farfalla: "My Lord, for all your skill in battle and all your strength in the Force, you are somewhat lacking in the delicate art of diplomacy. You are a brilliant general, and your taciturn nature serves you well when giving orders to your troops. Unfortunately, it can set those who are not under your command on edge."
Pernicar: "You are too blunt, my Lord."
Farfalla: "That's what I just said…"
―Farfalla, Hoth and Pernicar[src]

Valenthyne Farfalla was deeply concerned with appearance and behavior. He dressed in fine clothes, gold, precious gems, spoke in a daring hero tone, and adopted aristocratic and flamboyant mannerisms. Some, including Lord Hoth, saw him as useless or playing hero because of this, while others found Farfalla witty or charming.[4] Farfalla was gifted in the art of natural persuasion even over other Jedi. Farfalla himself believed he was simply showing a good sense of taste.[3] Valenthyne had a strong sense of honor even assembling a task force of Jedi to eliminate Darth Bane without telling the council as to finish his promise to Hoth.

Valenthyne Farfalla was a Jedi Master of many talents. He acted as a general during the Sith war, leading three hundred soldiers and then assuming command of the entire Army of Light upon Hoth's death. While fighting on Ruusan, he wielded a blue-bladed lightsaber.[3] In the years after the war, Farfalla wielded a gold-bladed saber. In combat, he adopted a graceful and defensive stance against his enemies. His fighting style was described as elegant and clean,[1] characteristics similar with those of the Makashi style of dueling.[9] Farfalla's skill with a lightsaber was less than that of his Jedi Weapons Master Raskta Lsu, a fact made obvious when she regarded him as a hindrance when they dueled against Darth Bane. His skills also were not enough to defeat those of Bane, who twice disarmed the Jedi Master in combat.[1]

Farfalla chose to use the Force for defense of himself and his allies. His skill allowed him to create Force barriers, which he used in assistance of his fellow Masters on Tython. When invigorated by Worror's battle meditation, Farfalla felt quicker and more powerful.[1]

In Star Wars: Jedi vs. Sith, Farfalla is depicted in a panel dying from the effects of the "thought bomb." The Complete Star Wars Encyclopedia states "both opposing forces were wiped out by Lord Kaan's thought bomb" (i.e. the Brotherhood of Darkness and the Army of Light) indicating Farfalla also perished at this time. However, in Drew Karpyshyn's novel Darth Bane: Path of Destruction Farfalla, as well as hundreds of Jedi in the Army of Light, survives the "thought bomb's" effects by fleeing the surface of Ruusan.

When asked about Farfalla's canonical species in the StarWars.com Message Boards, Leland Chee did not answer concretely but suggested that "all pointy-eared species are either Sephi or closely related to Sephi."[10]

In other languages
Retrieved from "https://starwars.fandom.com/wiki/Valenthyne_Farfalla?oldid=10248990"
Community content is available under CC-BY-SA unless otherwise noted.