Years after the Battle of Yavin[1]

After much reflection, I came to realize that the years I spent at Sentinel Base were as formative as my years of schooling on Eriadu's Carrion Plateau, or as significant as any of the battles in which I had participated or commanded.An excerpt from the memoir

The Imperial Grand Moff Wilhuff Tarkin wrote a memoir during his lifetime. In the memoir he wrote about the importance of the period of his life which he spent as commander of Sentinel Base, an Imperial facility where he oversaw the construction of the Death Star superweapon. He compared the experience to his time training on the Carrion Plateau region of his homeworld Eriadu and to the many military engagements he had taken part in, claiming his only regret on the matter was that he had not controlled the project better so that it might of been completed at an earlier date. At no point in his writing did Tarkin compare himself to the Galactic Emperor Sheev Palpatine or the Sith Lord Darth Vader. The memoirs were not published until many years after Tarkin's death[1] at the Battle of Yavin.[2]

In other languages Türkçe 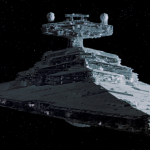