Live your own Star Wars story!

Star Wars: Galaxy's Edge, a new themed land in Disneyland Park in Anaheim, California and Disney's Hollywood Studios in Orlando, Florida, is set during the time of the sequel trilogy and continues the story of the Resistance and the war against the First Order on the planet Batuu, one of the last stops before the Unknown Regions and Wild Space. Live your own Star Wars story at the Disneyland Resort and the Walt Disney World Resort!

Once a popular stop for travelers during the years before hyperspace travel, Batuu became bypassed when the invention of hyperspace routes rendered the outpost obsolete. Millennia later, the planet's largest settlement, Black Spire Outpost, was a haven for those who did not wish to be found, but they could not hide forever. The Resistance arrived and set up base in the ruins outside the village, and the First Order soon followed. Now the citizens of Black Spire are stuck between two factions at war, hoping to stay low and continue business as normal. 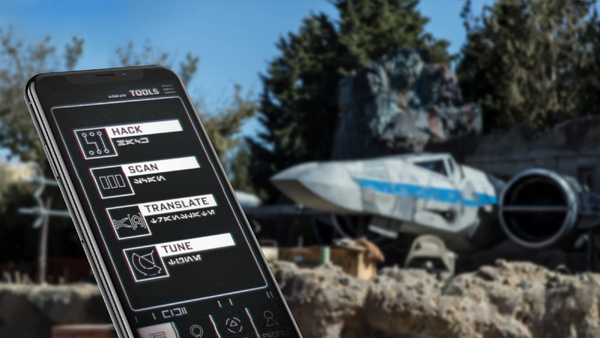 Guests are able to use the Play Disney Parks app, available on both the App Store and Google Play, to transform their smartphones into a datapad that can be used to hack into security cameras and droids, translate various spoken and written languages, tap into communications, and scan hidden cargo! Your datapad will also keep track of your personal profile, such as your credits and reputation score, and it will broadcast that information via Bluetooth to nearby workers if you so choose, allowing them to interact with you accordingly.

Access to Star Wars: Galaxy's Edge is subject to capacity. If the land has not reached its maximum capacity, guests will be allowed to walk in the same as any other area of Disneyland. If the land is closed due to reaching capacity, however, a virtual queue system will be activated. In order to get a spot for your party in this queue, you must book a boarding pass through either the Disneyland App or via select FastPass kiosks throughout the park. Be advised, once you confirm your party for the pass, you will not be able to change it. After acquiring your boarding pass, keep an eye out for a notification telling you your boarding party is now allowed access to Star Wars: Galaxy's Edge. If you are using the traditional paper FastPass kiosks, digital boards throughout the park will indicate which boarding groups are being accepted into the land. There is no time limit once you enter the land, so feel free to soak it all in for however long you wish! It is worth noting that, in the case where not enough people exit the land to open it up to more boarding parties, existing groups in the queue may not gain access. Being in the virtual queue does not guarantee access to the land.

Star Wars: Galaxy's Edge at Disney's Hollywood Studios does not feature a reservation system. Access to the land is granted using the same style of virtual queue used at Disneyland after the reservation system ended at that park.