Wookieepedia
Register
Don't have an account?
Sign In
Advertisement
in: Real-world articles, Articles with an excess of redlinks, Quotes with obsolete sourcing,
and 3 more

When the Empire died, they were born—a new hope for the New Republic. The young twins of Han Solo and Princess Leia have taken their first steps as Jedi Knights, defeating the evil minions of the Shadow Academy. Now, with their friends Tenel Ka and Lowbacca the Wookiee, the future heroes of an already legendary saga continue their training.

Jacen and Jaina set off for the Alderaan system, determined to salvage a piece of the shattered planet as a gift for their mother. But amid the ghosts of a dead world, the twins are in for a deadly surprise: some ghosts still live. A long-lost enemy of the Solo family is about to return…

"Again, there has to be a certain balance to a ret-con for a hardcore fan to buy it, including myself. I think the Ailyn Vel fix had a sufficient confluence of influences […] to score higher than average on the believability-meter."
―Abel G. Peña[src]

In 2005, the Star Wars Insider 80 article "The History of the Mandalorians," by Abel G. Peña, revealed that the character Ailyn Vel, daughter of Boba Fett, had been posing as her father, and that Fett himself does not actually appear in Star Wars: Young Jedi Knights.[3] Peña gave several reasons for the retcon: First, he felt that Fett's actions in Young Jedi Knights: Shards of Alderaan did not match his characterization from previous appearances, most notably the 1996 short story "The Last One Standing: The Tale of Boba Fett." Additionally, in Young Jedi Knights: Diversity Alliance, the character Nolaa Tarkona suggests that Fett could be female. These points, coupled with early fan speculation that Fett was female, led Peña to conceive the idea that Fett's previously unnamed child from the 2001 comic story "Outbid But Never Outgunned" was Vel, a daughter who at times masqueraded as her father.[4] 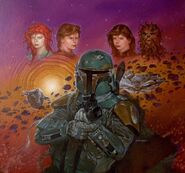