"Widely considered the best soldiers in the galaxy, Imperial spacetroopers specialize in assaulting and capturing enemy starships. Like the Imperial Marines, they serve aboard the vessels of the Imperial Navy. Unlike the Marines, spacetroopers operate best in the airless interstellar void."
―TX-5532, Imperial Handbook: A Commander's Guide[src]

The Zero-G assault stormtroopers, commonly known as spacetroopers, were members of a specialized branch of the Imperial Stormtrooper Corps equipped and trained to capture enemy vessels intact. They also operated within the Imperial Navy.

To perform their missions, spacetroopers wore a two-meter tall set of Zero-G armor that interfaced with standard stormtrooper armor. The suit provided a hermetic seal against the vacuum of space and propulsion that allowed spacetroopers to move and fight in space for extended periods. As a result, the official field manual for officers in the Imperial Military, Imperial Handbook: A Commander's Guide, compared it to a small-single pilot spacecraft, with one of the leaders of the Rebel Alliance, Leia Organa Solo, reluctantly admitting that the description was indeed very accurate, citing that a single spacetrooper was more than capable of breaching and seizing control of a blockade runner.[4] It is also stated that Space troopers are considered the best troops in the galaxy.

In addition to the large, boxy armor most commonly seen, spacetroopers during the Thrawn campaign made use of a more form fitting style of armor. This style appeared as a bulkier form of standard stormtrooper armor that afforded greater flexibility but greatly reduced firepower, armor, and mobility. It is unclear if this model of spacetrooper armor replaced the older design or was a variant.

A third style of "Spacetrooper" emerged early, during the building of the first Death Star, but was rarely seen. These units were deployed to many zero-G environments, such as areas outside the Death Star's artificially generated atmosphere. It was simply standard stormtrooper armor vacuum sealed, with a rebreather unit and a back-mounted jetpack. This system had no built-in weapons, and just relied on what the trooper carried in-hand. While it had much less mobility in space, it did have the advantage of being lighter, smaller and easier to move in small spaces, such as inside ships or bases that did not have atmosphere or gravity.

For all their advantages, however, spacetroopers had weaknesses. Like most electronics-based equipment, spacetrooper armor was vulnerable to EMP bursts, which if spacetroopers were caught in a burst, they were effectively left immobile in space. In addition, their weapons systems were ill-suited for starfighter combat.[4]

Originating during the Clone Wars, the Galactic Marines tested prototype spacetrooper suits during the Battle of New Bornalex. The weapon systems failed, and the marines were forced to use hand-to-hand combat and succeeded.[5] The Empire corrected the problem with a new armor design by Dr. Nashiak Llalik (based on Llalik's own scrapped pet project Sunder 9 armor)[6] and made use of them.

Spacetroopers, along with representatives from every specialized Stormtrooper Corps, were assigned to Darth Vader's personal Death Squadron.[7] Spacetroopers were used to patrol the outside of the First Death Star. Several spacetroopers served in the Battle of Endor, attacking Rebel ships entering the Second Death Star.

Spacetroopers continued to see use after Endor, with Leia requesting that the Rebel forces require training and countermeasures against them. Wedge Antilles, the leader of Rogue Squadron, suggested using starfighter escorts due to the spacetroopers being incapable of handling dogfights, and the General Crix Madine likewise suggested implementing EMP measures due to their effecting spacetroopers.[4]

Spacetroopers were deployed during the Battle of Sluis Van in 9 ABY. They were primarily used to board and capture several New Republic ships. By the end of the battle, seven of the spacetroopers had been destroyed, while the remaining two self-destructed, with one crippling a Corvette in the process.[1]

In 11 ABY, during the Battle of the Maw, two Spacetroopers were sent to the reactor of the Death Star prototype when the Imperials piloting the Battlestation detected an intruder, which turned out to be the Millennium Falcon, piloted by Han Solo, Mara Jade, and Lando Calrissian, who were attempting to sabotage the station by planting explosives. As the Spacetroopers began to scuffle with Jade, one was thrown into the reactor and killed. The other attempted to disable the explosives as the Falcon flew away, disarming all but one, which exploded, killing him. Eventually, several more Spacetroopers were sent to repair the reactor, understanding that the radiation was lethal and that they would likely not survive. They managed to successfully make their repairs before succumbing to the lethal doses of radiation.[2]

The Hasbro 2009 version of the Spacetrooper (Hasbro's 2nd Spacetrooper toy, the first based on the Light Spacetrooper armor above) looks like an ordinary Stormtrooper but with jetpack and attachable breathing apparatus. He is armed with E-11 blaster rifle and a weapon which resembles a grenade launcher from the Battlefront series. Production photos from A New Hope reveal that effects-designer Joe Johnston was the man behind the mask, leading to speculation from fans that the Hasbro 2009 figure would feature Johnston. Hasbro stated in a June 2008 Q&A that although they could never do Johnston's likeness on the Spacetrooper figure, they seemed to joke that there could be a "coincidental resemblance."[8][9] 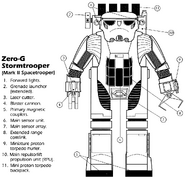